Supercharge your next cluster with NVIDIA A100, Tesla V100 or T4 GPUs
Microway NVIDIA GPU Clusters

It is easier than ever to harness GPUs in your applications. Many libraries include pre-optimized GPU support; language bindings are available for Python, Java, C#, C, C++, Fortran and more. OpenACC allows a single C/C++/Fortran codebase to be used across GPUs, x86 CPUs, and POWER8 CPUs (much like a GPU-accelerated OpenMP). Visit NVIDIA’s GPU Software Development Tools site for more resources. 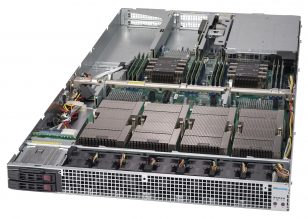 One CPU and Two GPUs with 1U NumberSmasher compute nodes 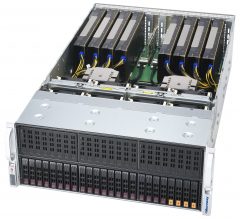 Microway offers a wide variety of servers optimized for GPUs. Any of these may be custom-integrated and combined into a unique configuration to fit your requirements. View a full list of Microway’s GPU-Accelerated servers.

An external GPU chassis allows addition of GPU compute capability to your existing HPC infrastructure. We partner with several vendors to supply GPU expansion systems compatible with many common servers. Up to 16 GPUs may be connected to a single server via 1-meter cables. Contact us to learn more about compatibility and pricing.

Telephone support is available for the lifetime of your cluster by Microway’s experienced technicians. After the initial warranty period, hardware warranties are offered on an annual basis. Out-of-warranty repairs are available on a time & materials basis.