Posted on September 8, 2016 by Eliot Eshelman

With the introduction of NVIDIA’s new “Pascal” Unified Memory capabilities, GPU-accelerated applications are able to access all system memory and the memory of all GPUs combined. With four Tesla P100 GPUs, a total of 64GB of high-bandwidth GPU memory is available (in addition to up to 1TB of system memory). NVLink connections (between each pair of GPUs and between the CPUs and the GPUs) allow for data transfers up to five times faster than PCI-Express. This design enables new applications which leverage large quantities of memory.

Each OpenPOWER GPU server arrives fully integrated with the operating system of your choice (RHEL, CentOS, or Ubuntu Linux), along with the NVIDIA CUDA 8.0 toolkit. Your choice of libraries, tools, and software applications are available for an additional fee. All systems pass rigorous stress tests prior to shipment.

Benefits of our OpenPOWER GPU Server with NVLink

A powerful compute accelerator must have fast access to memory. These OpenPOWER systems provide NVLink connections between the CPUs and the GPUs, which allows for unprecedented communication speeds between the CPUs and GPUs. These links also enable rapid data transfer between system memory and GPU memory, which allows GPU applications to operate directly on system memory (in addition to leveraging the high-bandwidth GPU memory). For applications which support execution across multiple GPUs, NVLink allows rapid communication between GPUs. NVIDIA’s NVLink interconnect provides unprecedented performance compared to previous-generation PCI-Express connectivity. Connections are also provided for full-speed GPU-Direct RDMA transfers as part of a GPU-accelerated HPC cluster. 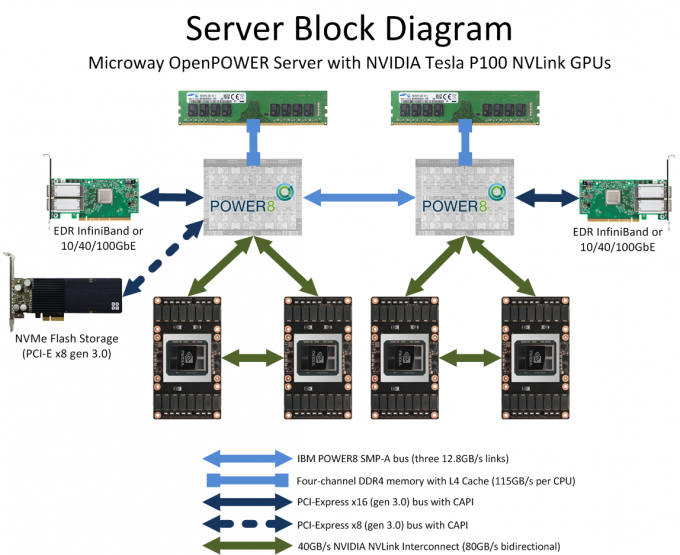 My interests span from astrophysics to bacteriophages; high-performance computers to small spherical magnets. I've been an avid Linux geek (with a focus on HPC) for more than a decade. I work as Microway's Vice President of Strategic Accounts and HPC Initiatives.
View all posts by Eliot Eshelman →
Bookmark the permalink.