You may have heard the buzz about Nvidia’s Maximus technology. While the buzz has been around for a little while, the latest product release has been worth the wait. The essence of Maximus is the unification of the driver base for Tesla GPUs and Quadro GPUs. With Maximus, CUDA device application becomes transparent to both developers and users. The upshot is that Maximus allocates workloads between compute (simulation and rendering) which goes to the Tesla GPU card(s) and design (visualization) going to the Quadro GPU card(s).

By embedding this functionality at the driver level, Nvidia makes the world simpler for both high performance computing developers and HPC users. More importantly, Maximus enables new workflow models that can dramatically reduce the time to iterate new designs and even enables restructuring of your design and simulation departments. Nvidia provides a handy graphic to represent the advantages of their new technology, shown here. 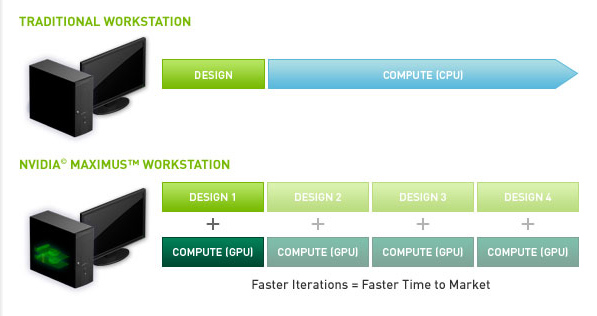 The ability to perform simultaneous CAE, rendering or multi-physics analysis such as structural dynamics, thermal analysis or computational fluid dynamics on the same system being used for design work enables productivity breakthroughs. In the past, the development process was dictated by the technological constraints of the workstation, whether one is developing a consumer product or a hit movie. Now, the process of design, development and production can be optimized by working in the most natural or efficient way. The design of workflows, and even departments and divisions that used to be driven by the split between design and simulation can now be rethought and retooled.

Because of faster design / simulation cycles, the result is faster time to value, with end products that are of higher quality reaching the market sooner.

With 2nd generation Maximus, performance per watt is significantly increased. Compared to prior designs, the new Kepler-based gpu cards feature a 3X performance per watt improvement. With this unparalleled leap in performance per watt, Nvidia is now enabling a workstation roadmap that has the potential to disrupt conventional thinking about how design, simulation and rendering can, and should be accomplished.

Nvidia sees the ‘age of the hybrid designer’ coming, who will be designing and simulating in real-time within the same application. Industries such as manufacturing design, energy and media and entertainment will be leveraging distributed, workstation-based supercomputing performance on currently available applications. We believe that ultimately a wide range of advanced applications that benefit from high-quality visualization and heavy computational requirements will be developed. New, deeply interactive design and engineering processes will enable the evaluation of more design variations in less time. We anticipate that the result will be higher-quality products, more product innovation, higher efficiency products developed in less time, with fewer delays and unanticipated flaws.

We’re now in a ‘future’ where complex animations and film scenes can be edited in real-time, even with complex ‘physics’ such as rain and wind. Where energy companies can interpret complex data sets and produce high-resolution visualizations of geological formations in record time. Where HPC professionals don’t have to schedule jobs to run at night or during lunch breaks to manage compute workloads. Nvidia Maximus will reduce or eliminate the processing bottlenecks that are the inevitable result of using shared compute resources. This will produce nothing short of a revolution in design and engineering speed, efficiency and productivity.

At Microway, We Speak HPC™, and we speak Maximus. Talk to a Microway advisor about how Maximus technology running on our WhisperStation™ can revolutionize the return on your engineering workstation investment. Contact us at WeSpeakHPC@Microway.com.

This entry was posted in Hardware. Bookmark the permalink.