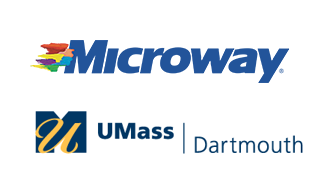 Microway, a leading provider of computational clusters, servers, and workstations for AI and HPC, announces that research activities are accelerating at the University of Massachusetts Dartmouth since the installation of a new supercomputing cluster.

This new cluster purchase was funded through an Office of Naval Research (ONR) DURIP grant award.

Serving Users Across a Research Campus

The deployment has helped continue to serve, attract and retain faculty, undergraduate students, and those seeking advance degrees to the UMass Dartmouth campus. The Center for Scientific Computing and Visualization Research administers the new compute resource.

With its new cluster, CSCVR is undertaking cutting edge work. Mathematics researchers are developing new numerical algorithms on the new deployment. A primary focus is in astrophysics: with focus on the study of black holes and stars.

“Our engineering researchers,” says Gaurav Khanna, Co-Director of UMass Dartmouth’s Center for Scientific Computing & Visualization Research, “are very actively focused on computational engineering, and there are people in mechanical engineering who look at fluid and solid object interactions.” This type of research is known as two-phase fluid flow. Practical applications can take the form of modelling windmills and coming up with a better design for the materials on the windmill such as the coatings on the blade, as well as improved designs for the blades themselves.

This team is also looking at wave energy converters in ocean buoys. “As buoys bob up and down,” Khanna explains, “you can use that motion to generate electricity. You can model that into the computation of that environment and then try to optimize the parameters needed to have the most efficient design for that type of buoy.”

A final area of interest to this team is ocean weather systems. Here, UMass Dartmouth researchers are building large models to predict regional currents in the ocean, weather patterns, and weather changes.

A Hybrid Architecture for a Broad Array of Workloads

The UMass Dartmouth cluster reflects a hybrid design to appeal to a wide array of the campus’ workloads.

Equally important are a second subset of POWER9 with 2nd Generation NVLink- based- IBM Power Systems AC922 Compute nodes. These systems are similar to those utilized in the world’s #1 and #2 most powerful Summit and Sierra supercomputers at ORNL and LLNL. The advanced NVIDIA NVLink interfaces built into POWER9 CPU and NVIDIA GPU ensure a broad pipeline between CPU:GPU for data intensive workloads.

The deployment of the hybrid architecture system was critical to meeting the users’ needs. It also allowed those on the UMass Dartmouth campus to apply to test workloads onto the larger national laboratory systems at ORNL.

Microway was one of the few vendors able to deliver a unified system with a mix of x86 and POWER9 systems, complete software integration across both kinds of nodes in the cluster, and offer a single point of sale and warranty coverage.

Microway was selected as the vendor for the new cluster through an open bidding process. “They not only competed well on the price,” says Khanna, “but they were also the only company that could deliver the kind of heterogeneous system we wanted with a mixture of architecture.”

About Microway, Inc.
Microway builds solutions for the intersection of AI and HPC. These include clusters, servers, quiet workstations designed for bleeding-edge computational performance—that serve demanding users in the enterprise, government, and academia.

Since 1982, customers have trusted Microway to deliver them unique and superior deployments—enabling them to remain at the forefront of supercomputing and solve the world’s toughest challenges. Microway is an NVIDIA NPN Elite Solution Provider and an IBM Business Partner. Classified as a small business, woman owned and operated, Microway’s GSA Schedule is GS-35F-0431N.