The Xeon E5-2600v4 processors provide the highest performance available to date in a socketed CPU. Many of the higher-end models provide well over 500 GFLOPS (more than half a TFLOPS). Much of this performance is made possible through the use of AVX2 with FMA3 instructions. The plot below compares the peak performance of these CPUs with and without FMA instructions: 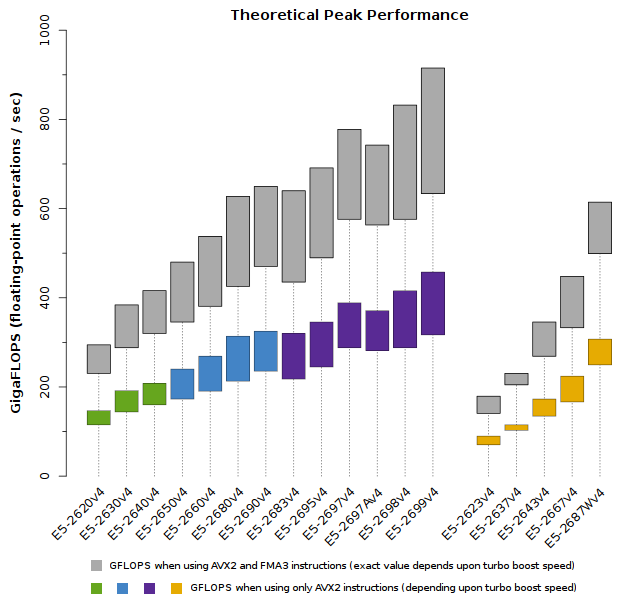 In fact, in some cases the CPU frequency has been lowered from the previous models. Processor frequency and Turbo Boost behavior have changed fairly significantly in the last two CPU releases (“Haswell” and “Broadwell”). Those metrics are discussed in further detail in the next section. 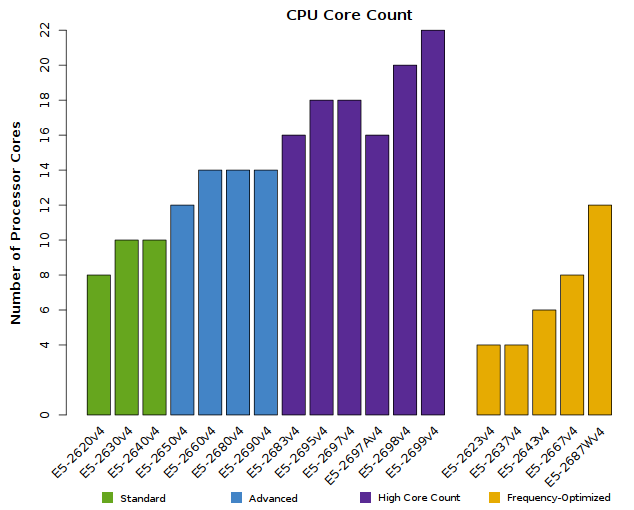 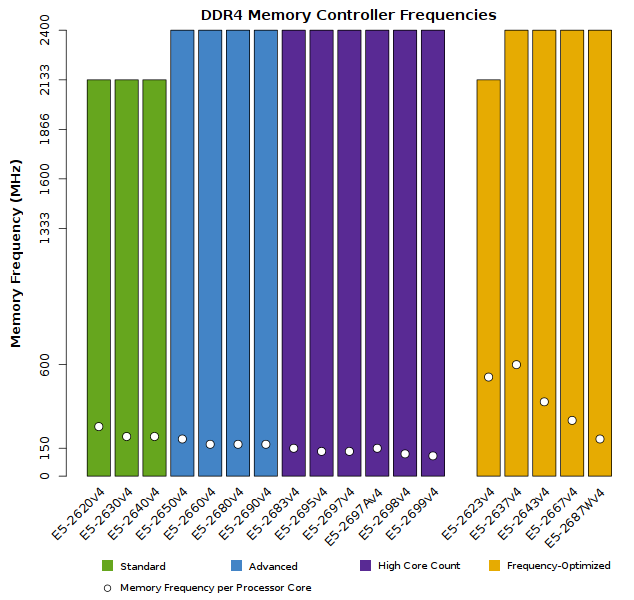 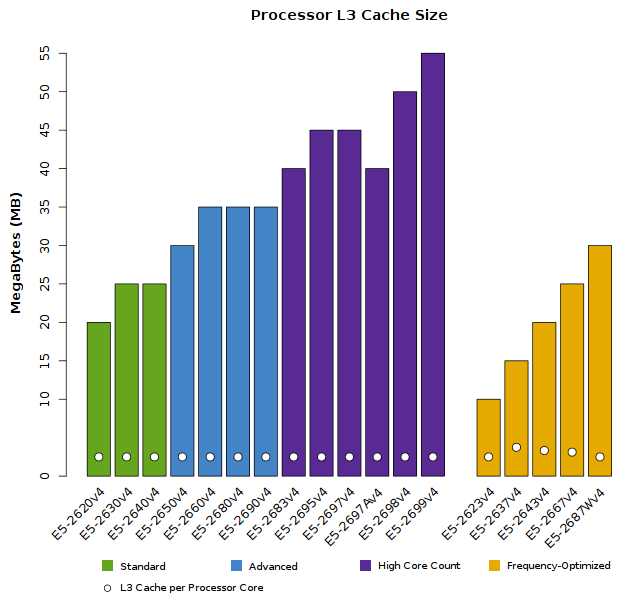 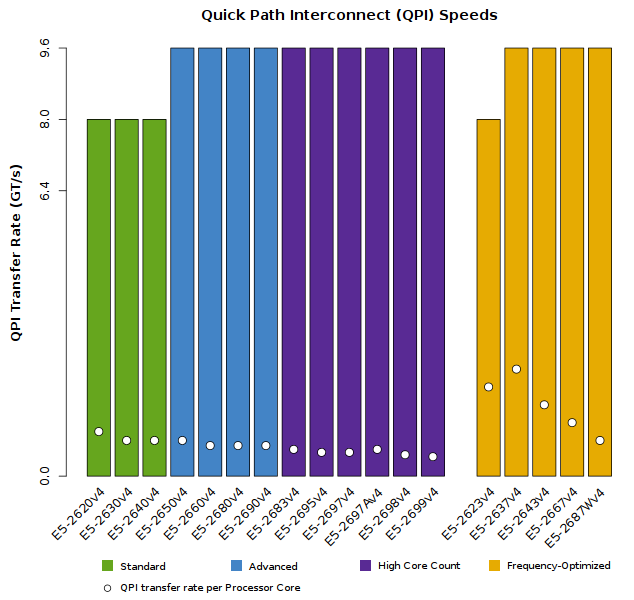 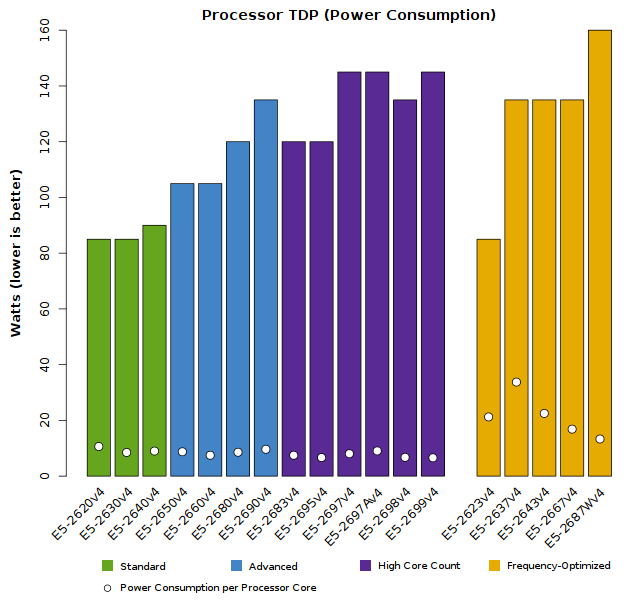 With each new processor line, Intel introduces new architecture optimizations. The design of the “Broadwell” architecture acknowledges that highly-parallel/vectorized applications place the highest load on the processor cores (requiring more power and thus generating more heat). While a CPU core is executing intensive vector tasks (AVX instructions), the clock speed may be reduced to keep the processor within its power limits (TDP).

In effect, this may result in the processor running at a lower frequency than the “base” clock speed advertised for each model. For that reason, each “Broadwell” processor is assigned two “base” frequencies:

It is worth noting that these modes are isolated to each core. Within a given CPU, some cores may be operating in AVX mode while others are operating in Non-AVX mode. In the previous generation, AVX instructions running on a single core would cause all cores to run in AVX mode.

Just as in previous architectures, “Broadwell” CPUs include the Turbo Boost feature which allows each processor core to operate well above the “base” clock speed during most operations. The precise clock speed increase depends upon the number & intensity of tasks running on each CPU. However, Turbo Boost speed increases also depend upon the types of instructions (AVX vs. Non-AVX). 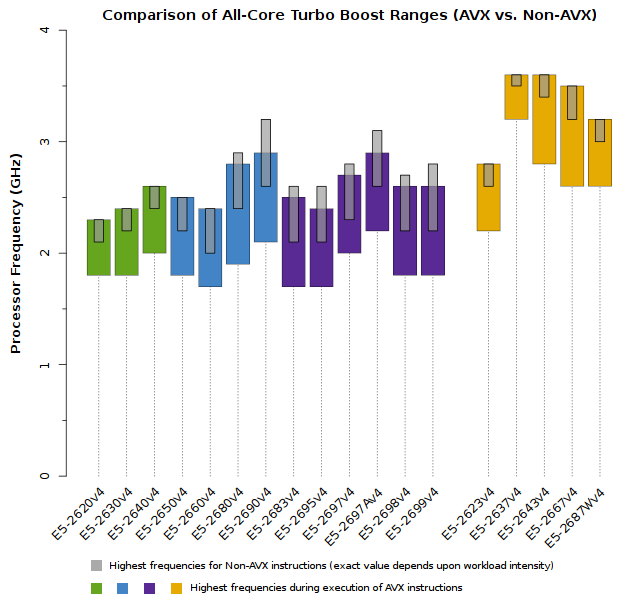 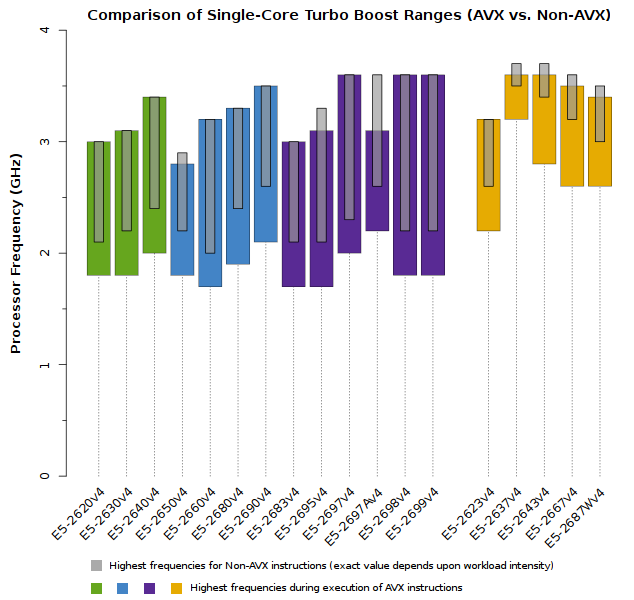 When workloads leave some CPU cores idle, the Xeon E5-2600v4 processors are able to use that headroom to increase the clock speed of the cores which are performing work. Just as with other Turbo Boost scenarios, the precise speed increase will depend upon the CPU model. It will also depend upon how many CPU cores are active.

One to Two cores 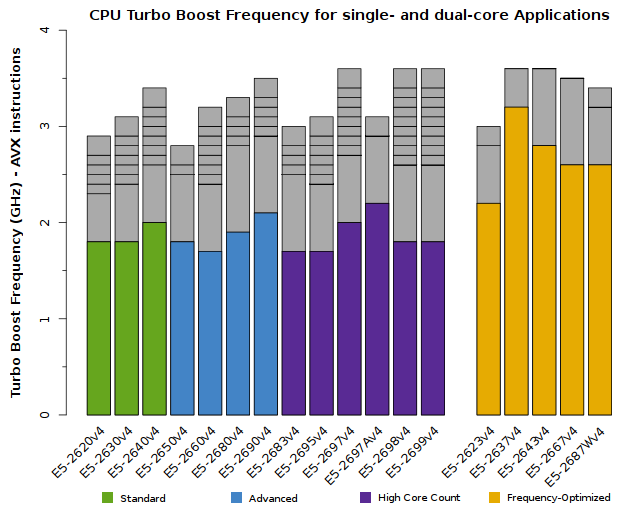 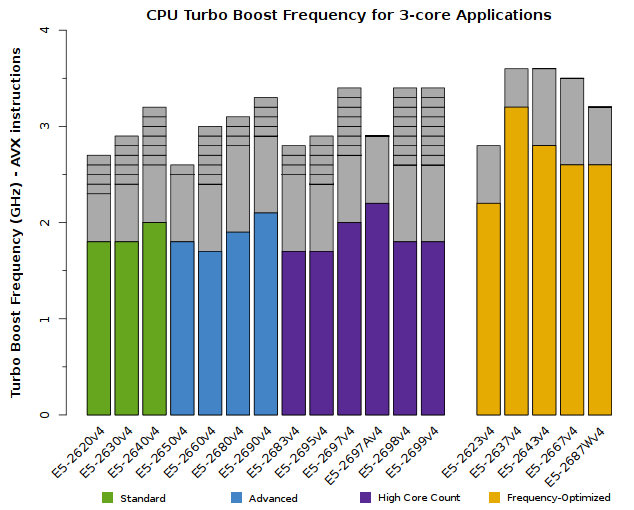 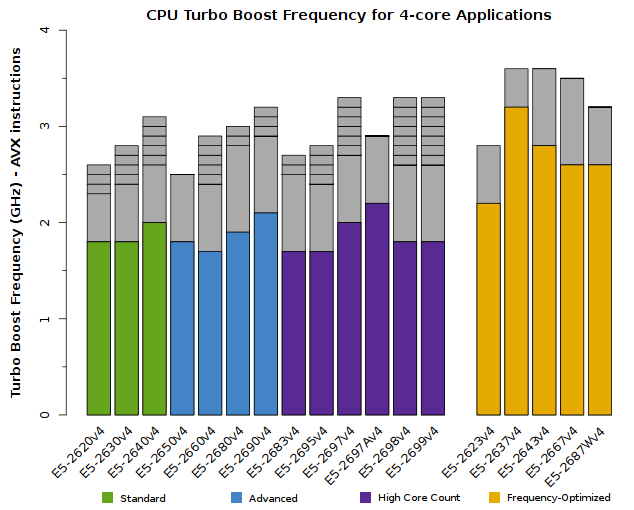 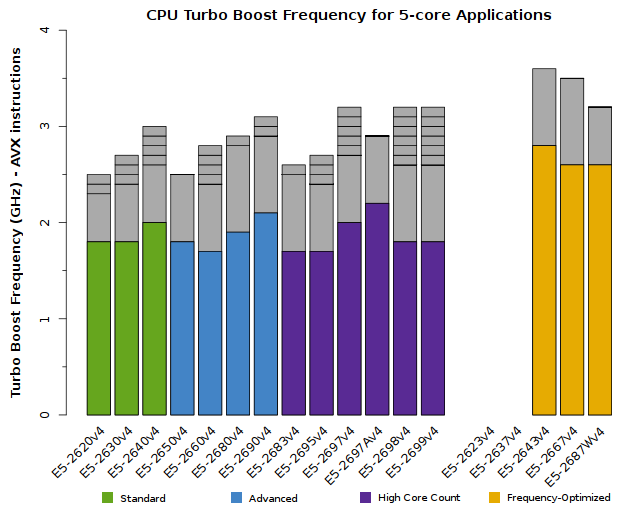 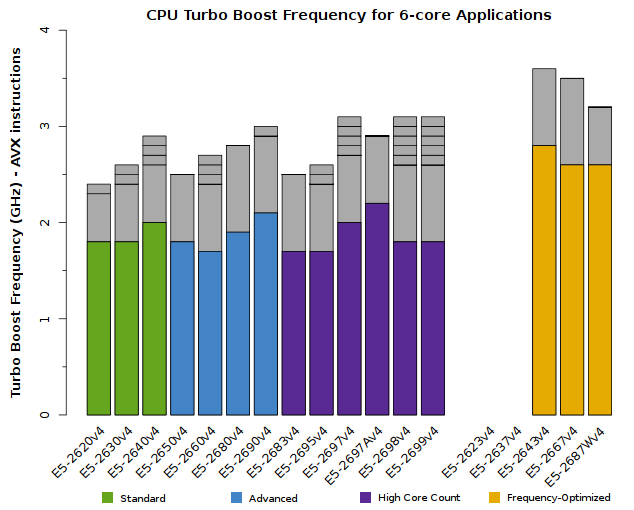 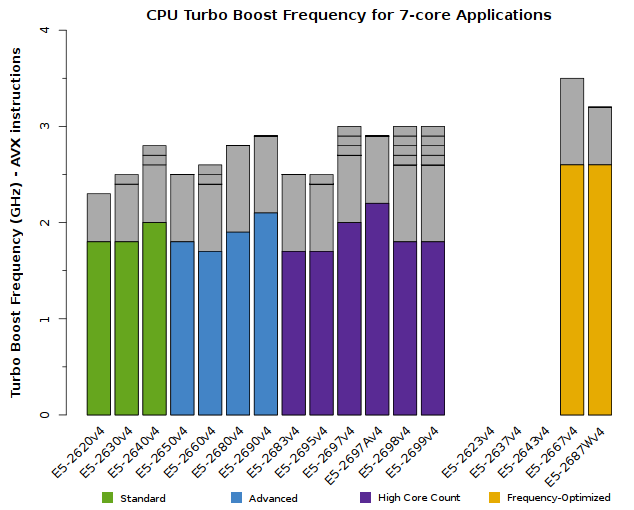 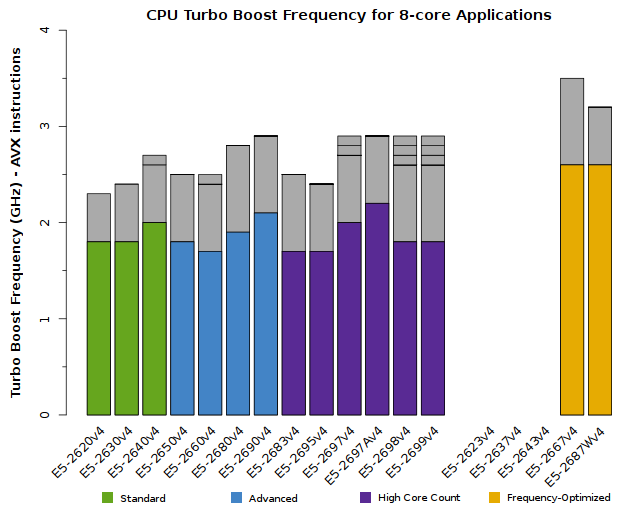 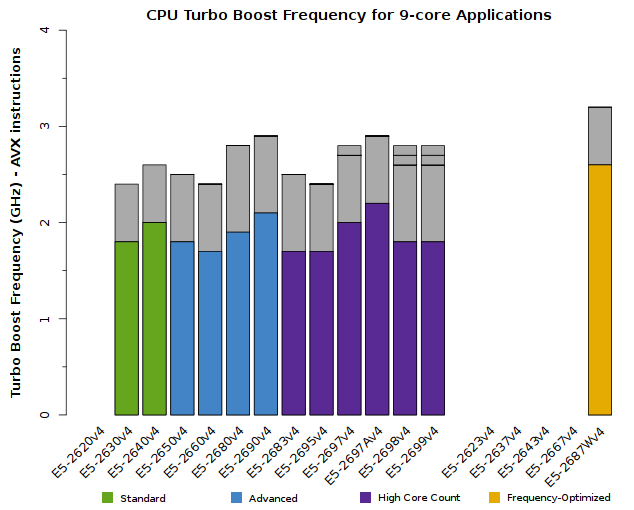 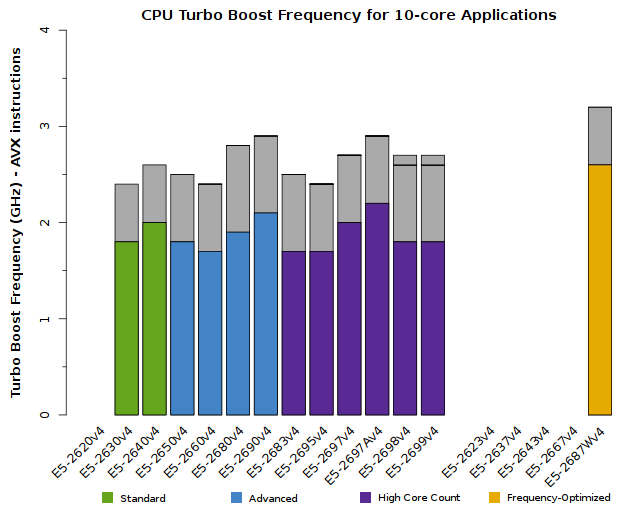 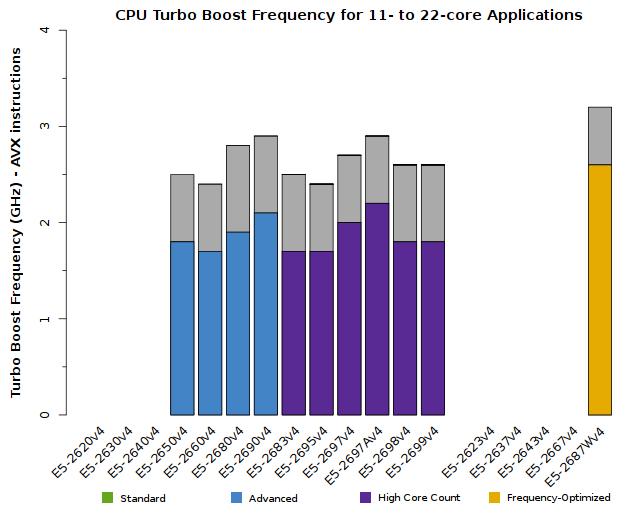 The “Broadwell-EP” processors have nearly the same price structure and power requirements as earlier Xeon E5-2600 products, so their cost-effectiveness and power-efficiency should be quite attractive to HPC users. Savvy readers may find the following facts useful: 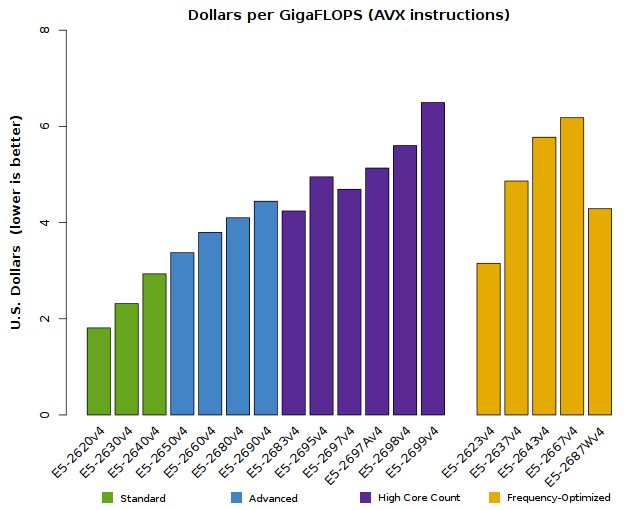 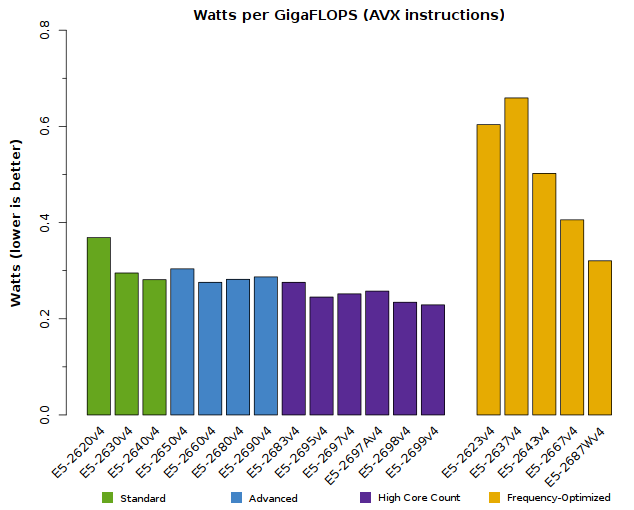 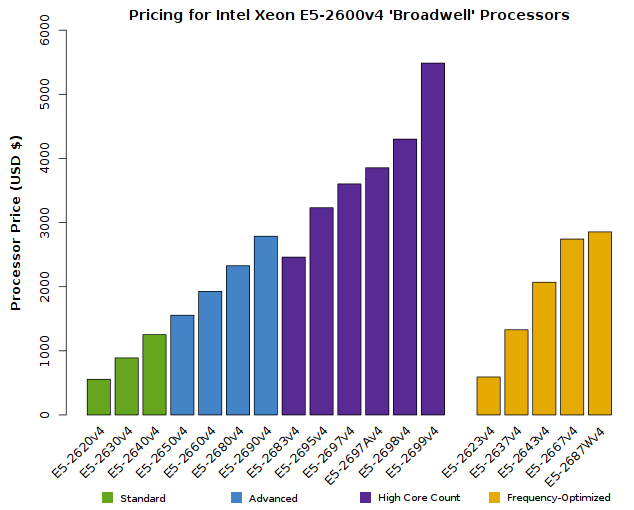