Today we begin shipping Intel’s new Xeon E5-2600 v4 processors. They provide more CPU cores, more cache, faster memory access and more efficient operation. These are based upon the Intel microarchitecture code-named “Broadwell” – we expect them to be the HPC processors of choice.

Expect these new processors to be more nimble than their predecessors. A variety of microarchitecture improvements have been added to increase parallelism, speed up processing time, and strip out inefficiencies from previous models. Broadwell reduces the time to complete a multiplication by 40% (division operations also complete more quickly). Each core’s ability to optimize instruction ordering has been improved by ~6%. The tables which manage on-die L2 cache have been expanded to speed up memory operations. Several CPU instruction latencies have been reduced. Overall, Intel expects these new CPUs to complete at least 5% more instructions on every clock cycle.

Because the new “Broadwell” CPUs are socket-compatible with the previous-generation “Haswell” CPUs, the upgrade path is simple. All existing platforms that support v3 CPUs can also accept v4 CPUs. This also simplifies the choice for those considering a new system: the new CPUs use existing, proven platforms. There’s little risk in selecting the latest and highest-performance components. Those who are adding to existing HPC clusters will find they have a choice: spend the same for increased performance or spend less for the same performance. Here is a comparison of the older generation with this new generation: 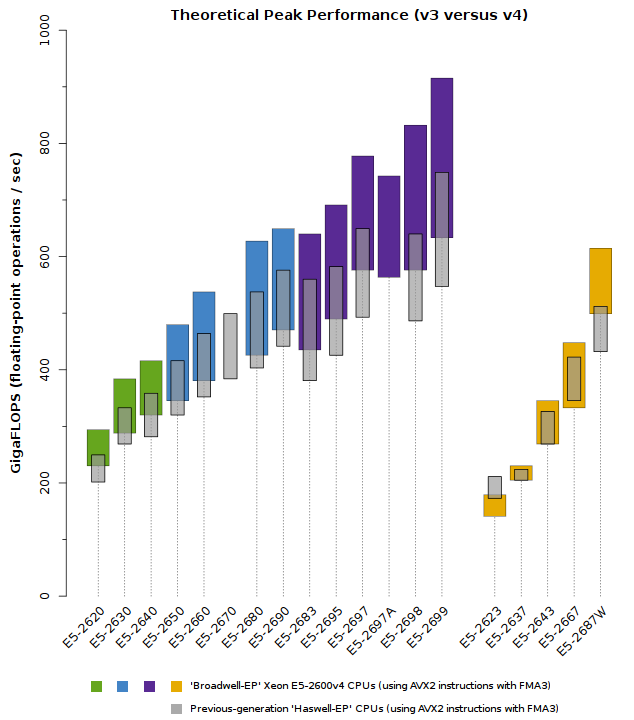 Get more for less – improved cost-effectiveness

Because each CPU core offers increased performance, and many models offer a higher core count, a lower-end CPU model can match performance with many of the older CPU models. Here are a few comparisons of note:

The E5-2623 CPU model has been modified in such a way that it isn’t ideal for the same workloads. Previously, it was a relatively high-clock-speed model available at a low price. However, the base clock speed has been adjusted downwards by 18%.

All of our Xeon workstations, servers & clusters are immediately available with these new CPUs. They are socket-compatible with all Xeon E5-2600 v3 platforms, so your existing systems can also be upgraded. Our most popular products which leverage these new Xeon processors are:

My interests span from astrophysics to bacteriophages; high-performance computers to small spherical magnets. I've been an avid Linux geek (with a focus on HPC) for more than a decade. I work as Microway's Vice President of Strategic Accounts and HPC Initiatives.
View all posts by Eliot Eshelman →
This entry was posted in Hardware and tagged cpu, High Performance Computing. Bookmark the permalink.