When NVIDIA launched the Ampere GPU architecture, they also launched their new flagship system for HPC and deep learning – the DGX 100. This system offers exceptional performance, but also new capabilities. We’ve seen immediate interest and have already shipped to some of the first adopters. Given our early access, we wanted to share a deeper dive into this impressive new system.

The focus of this NVIDIA DGX™ A100 review is on the hardware inside the system – the server features a number of features & improvements not available in any other type of server at the moment. DGX will be the “go-to” server for 2020. But hardware only tells part of the story, particularly for NVIDIA’s DGX products. NVIDIA employs more software engineers than hardware engineers, so be certain that application and GPU library performance will continue to improve through updates to the DGX Operating System and to the whole catalog of software containers provided through the NGC hub. Expect more details as the year continues. 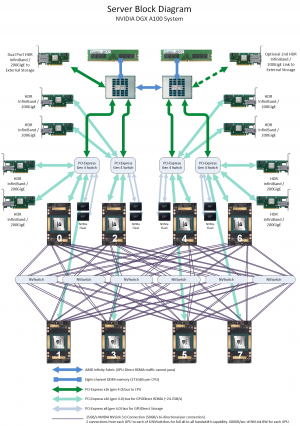 As you’ll see from the block diagram on the right, there is a lot to break down within such a complex system. Though it’s a very busy diagram, it becomes apparent that the design is balanced and well laid out. Breaking down the connectivity within DGX A100 we see:

We’ll dig into each aspect of the system in turn, starting with the CPUs and making our way down to the new NVIDIA A100 GPUs. Readers should note that throughput and performance numbers are only useful when put into context. You are encouraged to run the same tests on your existing systems/servers to better understand how the performance of DGX A100 will compare to your existing resources. And as always, reach out to Microway’s DGX experts for additional discussion, review, and design of a holistic solution.

With two 64-core EPYC CPUs and 1TB or 2TB of system memory, the DGX A100 boasts respectable performance even before the GPUs are considered. The architecture of the AMD EPYC “Rome” CPUs is outside the scope of this article, but offers an elegant design of its own. Each CPU provides 64 processor cores (supporting up to 128 threads), 256MB L3 cache, and eight channels of DDR4-3200 memory (which provides the highest memory throughput of any mainstream x86 CPU).

Most users need not dive further, but experts will note that each EPYC 7742 CPU has four NUMA nodes (for a total of eight nodes). This allows best performance for parallelized applications and can also reduce the impact of noisy neighbors. Pairs of GPUs are connected to NUMA nodes 1, 3, 5, and 7. Here’s a snapshot of CPU capabilities from the lscpu utility:

Here’s how the filesystems look on a fresh DGX A100:

The industry is trending towards Linux software RAID rather than hardware controllers for NVMe SSDs (as such controllers present too many performance bottlenecks). Here’s what the above md0 and md1 arrays look like when healthy:

It’s worth noting that although all the internal storage devices are high-performance, the scratch drives making up the /raid filesystem support the newer PCI-E generation 4.0 bus which doubles I/O throughput. NVIDIA leads the pack here, as they’re the first we’ve seen to be shipping these new super-fast SSDs. 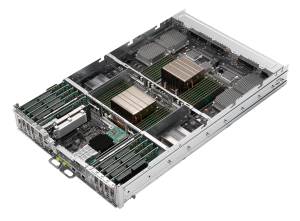 Depending upon the deployment, nine or ten Mellanox 200Gbps adapters are present in each DGX A100. These adapters support Mellanox VPI, which enables each port to be configured for 200G Ethernet or HDR InfiniBand. Though Ethernet is particularly prevalent in particular sectors (healthcare and other industry verticals), InfiniBand tends to be the mode of choice when highest performance is required.

In practice, a common configuration is for the GPU-adjacent adapters be connected to an InfiniBand fabric (which allows for high-performance RDMA GPU-Direct and Magnum IO communications). The adapter(s) attached to the CPUs are then used for Ethernet connectivity (often meeting the speed of the existing facility Ethernet, which might be any one of 10GbE, 25GbE, 40GbE, 50GbE, 100GbE, or 200GbE).

Leveraging the fast PCI-E 4.0 bus available in DGX A100, each 200Gbps port is able to push up to 24.6GB/s of throughput (with latencies typically ranging from 1.09 to 202 microseconds as measured by OSU’s osu_bw and osu_latency benchmarks). Thus, a properly tuned application running across a cluster of DGX systems could push upwards of 200 gigabytes per second to the fabric!

NVIDIA built a new generation of NVIDIA NVLink into the NVIDIA A100 GPUs, which provides double the throughput of NVLink in the previous “Volta” generation. Each NVIDIA A100 GPU supports up to 300GB/s throughput (600GB/s bidirectional). Combined with NVSwitch, which connects each GPU to all other GPUs, the DGX A100 provides full connectivity between all eight GPUs.

Running NVIDIA’s p2pBandwidthLatencyTest utility, we can examine the transfer speeds between each set of GPUs:

The above values show GPU-to-GPU transfer throughput ranging from 247GB/s to 262GB/s. Running the same test in bidirectional mode shows results between 473GB/s and 508GB/s. Execution within the same GPU (running down the diagonal) shows data rates around 1,150GB/s.

Turning to latencies, we see fairly uniform communication times between GPUs at ~3 microseconds:

As with the bandwidths, the values down the diagonal show execution within that particular GPU. Latencies are lower when executing within a single GPU as there’s no need to hop across the bus to NVSwitch or another GPU. These values show that the same-device latencies are 0.3~0.5 microseconds faster than when communicating with a different GPU via NVSwitch.

Finally, we want to share the full DGX A100 topology as reported by the nvidia-smi topo --matrix utility. While a lot to digest, the main takeaways from this connectivity matrix are the following:

Just as it’s important for the GPUs to be able to communicate with each other, the CPUs must be able to communicate with the GPUs. A100 is the first NVIDIA GPU to support the new PCI-E gen4 bus speed, which doubles the transfer speeds of generation 3. True to expectations, NVIDIA bandwidthTest demonstrates 2X speedups on transfer speeds from the system to each GPU and from each GPU to the system:

As you might notice, these performance values are right in line with the throughput of each Mellanox 200Gbps adapter. Having eight network adapters with the exact same bandwidth as each of the eight GPUs allows for perfect balance. Data can stream into each GPU from the fabric at line rate (and vice versa).

Diving into the NVIDIA A100 SXM4 GPUs

The DGX A100 is unique in leveraging NVSwitch to provide the full 300GB/s NVLink bandwidth (600GB/s bidirectional) between all GPUs in the system. Although it’s possible to examine a single GPU within this platform, it’s important to keep in mind the context that the GPUs are tightly connected to each other (as well as their linkage to the EPYC CPUs and the Mellanox adapters). The single-GPU information we share below will likely match that shown for A100 SXM4 GPUs in other non-DGX systems. However, their overall performance will depend on the complete system architecture.

To start, here is the ‘brief’ dump of GPU information as provided by nvidia-smi on DGX A100:

The clock speed and power consumption of each GPU will vary depending upon the workload (running low when idle to conserve energy and running as high as possible when executing applications). The idle, default, and max boost speeds are shown below. You will note that memory speeds are fixed at 1215 MHz.

Those who have particularly stringent efficiency or power requirements will note that the NVIDIA A100 SXM4 GPU supports 81 different clock speeds between 210 MHz and 1410MHz. Power caps can be set to keep each GPU within preset limits between 100 Watts and 400 Watts. Microway’s post on nvidia-smi for GPU control offers more details for those who need such capabilities.

Each new generation of NVIDIA GPUs introduces new architecture capabilities and adjustments to existing features (such as resizing cache). Some details can be found through the deviceQuery utility, reports the CUDA capabilities of each NVIDIA A100 GPU device:

In the NVIDIA A100 GPU, NVIDIA increased cache & global memory size, introduced new instruction types, enabled new asynchronous data copy capabilities, and more. More complete information is available in our Knowledge Center article which summarizes the features of the Ampere GPU architecture. However, it could be argued that the biggest architecture change is the introduction of MIG.

For years, virtualization has allowed CPUs to be virtually broken into chunks and shared between a wide group of users and/or applications. One physical CPU device might be simultaneously running jobs for a dozen different users. The flexibility and security offered by virtualization has spawned billion dollar businesses and whole new industries.

NVIDIA GPUs have supported multiple users and virtualization for a couple of generations, but NVIDIA A100 GPUs with MIG are the first to support physical separation of those tasks. In essence, one GPU can now be sliced into up to seven distinct hardware instances. Each instance then runs its own completely independent applications with no interruption or “noise” from other applications running on the GPU: 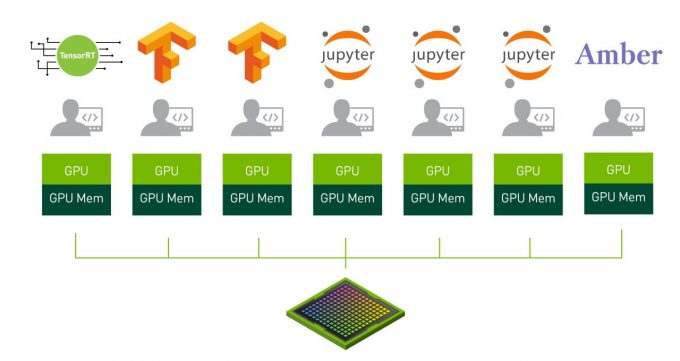 The MIG capabilities are significant enough that we won’t attempt to address them all here. Instead, we’ll highlight the most important aspects of MIG. Readers needing complete implementation details are encouraged to reference NVIDIA’s MIG documentation.

Each GPU can have MIG enabled or disabled (which means a DGX A100 system might have some shared GPUs and some dedicated GPUs). Enabling MIG on a GPU has the following effects:

Also note that the caveats don’t extend all the way through the CUDA capabilities and software stack. The following features are supported when MIG is enabled:

When MIG is fully-enabled on the DGX A100 system, up to 56 separate GPU Instances can be executed simultaneously. That could be 56 unique workloads, 56 separate users each running a Jupyter notebook, or some other combination of users and applications. And if some of the users/workloads have more demanding needs than others, MIG can be reconfigured to issue larger slices of the GPU to those particular applications. 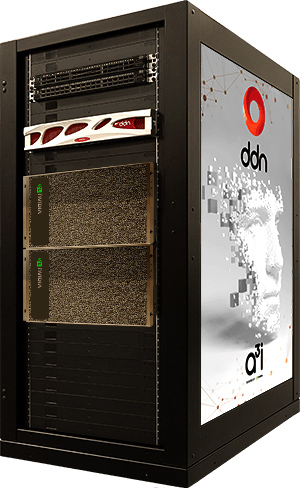 As mentioned at the top, this new hardware is quite impressive, but is only one part of the DGX story. NVIDIA has multiple software stacks to suit the broad range of possible uses for this system. If you’re just getting started, there’s a lot left to learn. Depending upon what you need next, I’d suggest a few different directions:

My interests span from astrophysics to bacteriophages; high-performance computers to small spherical magnets. I've been an avid Linux geek (with a focus on HPC) for more than a decade. I work as Microway's Vice President of Strategic Accounts and HPC Initiatives.
View all posts by Eliot Eshelman →
This entry was posted in Benchmarking, Hardware and tagged A100, gpu, NVLink. Bookmark the permalink.