Articles > Detailed Specifications of the AMD EPYC “Rome” CPUs
This article provides in-depth discussion and analysis of the 7nm AMD EPYC processor (codenamed “Rome” and based on AMD’s Zen2 architecture). EPYC “Rome” processors replace the previous “Naples” processors and are available for sale as of August 7th, 2019. We also have provided an AMD EPYC “Rome” CPU Review that you may wish to review. Note: these have since been superseded by the “Milan” AMD EPYC CPUs.

These new CPUs are the second iteration of AMD’s EPYC server processor family. They remain compatible with the existing workstation and server platforms, but feature significant feature and performance improvements. Some of the new features (e.g., PCI-E 4.0) will require updated/revised platforms. If you’re looking to upgrade to or deploy these new CPUs, please speak with one of our experts to learn more.

Before diving into the details, it helps to keep in mind the following recommendations. Based on our experience with HPC and Deep Learning deployments, our guidance for selecting among the EPYC options is as follows:

Microway operates a Test Drive cluster to assist in evaluating and comparing these options as users develop the specifications for their new HPC & AI deployments. We would be happy to help you evaluate AMD EPYC processors as you plan your purchase.

The EPYC “Rome” processors deliver new capabilities and exceptional performance. Many models provide over 1 TFLOPS (one teraflop of double-precision 64-bit performance per second) and several models provide 2 TFLOPS. This performance is achieved by doubling the computational power of each core and doubling the number of cores. The plot below shows the performance range across this new CPU line-up: 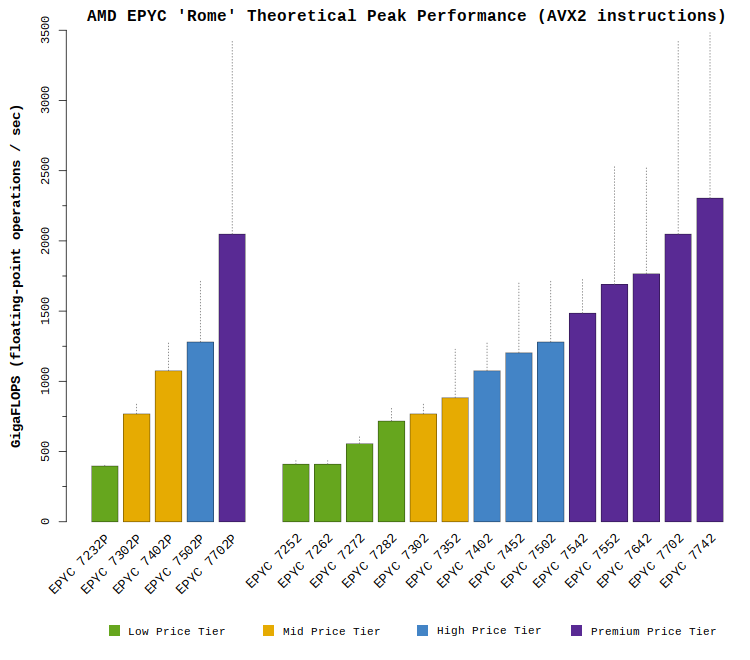 The dotted lines indicate the possible peak performance if all cores are operating at boosted clock speeds. While theoretically possible for short bursts, sustained performance at these levels is not expected. Sections of code with dense, vectorized instructions are very demanding, and typically result in the processor core slightly lowering its clock speed (this behavior is not unique to AMD CPUs). While AMD has not published specific clock speed expectations for such codes, Microway expects the EPYC “Rome” CPUs to operate near their “base” clock speed values even when executing code with intensive instructions.

The CPU models above are sorted by price (as discussed in the next section). The lowest-performance models provide fewer numbers of CPU cores, less cache, and slower memory speeds. Higher-end models offer high core counts for the best performance. HPC and AI groups are generally expected to favor the mid-range processor models, as the highest core count CPUs are priced at a premium.

Note that those models which only support single-CPU installations are separated on the left side of each plot.

The new EPYC “Rome” processors span a fairly wide range of prices, so budget must be considered when selecting a CPU. While the entry-level models are under $1,000, the highest-end EPYC processors cost nearly $10,000 each. It would be frustrating to plan for 64-core processors when the budget cannot support the price. The plot below compares the prices of the EPYC “Rome” processors: 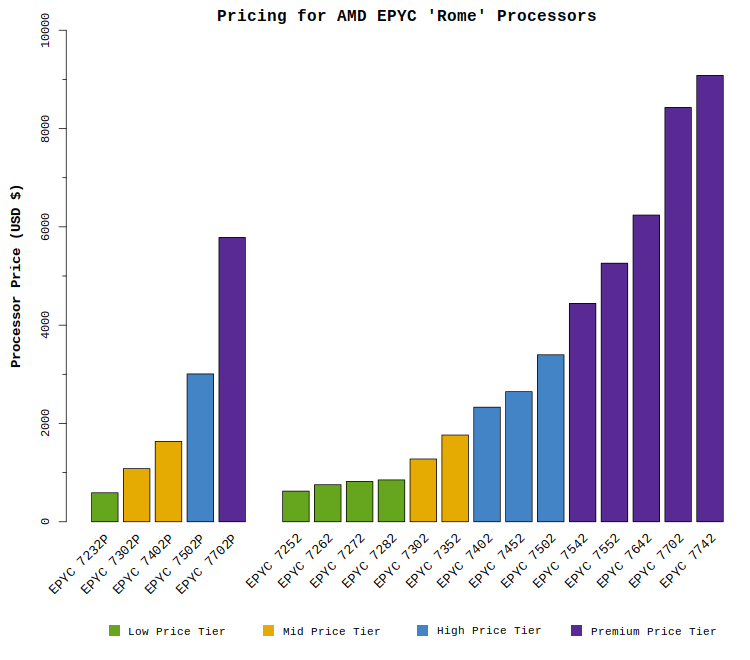 Most HPC users are expected to select CPU models around the high price tier. These models provide industry-leading performance (and excellent performance per dollar) for a price under $4,000 per processor. Applications can certainly leverage the premium EPYC processor models, but they will come at a higher price.

The set of tabs below compares the features and specifications of this new EPYC processor family. Take note that certain CPU SKUs are designed for single-socket systems (indicated with a P suffix on the part number). All other models may be used in either a single- or dual-socket system. The P-series AMD EPYC CPUs have a lower price and are thus the most cost-effective models, but remember that they are not available in dual-CPU systems.

Most HPC groups will find that processors with 16 to 32 CPU cores are attractively priced. Systems with up to 32-cores per CPU will be in the price ranges commonly selected for HPC & AI workloads. However, the 48-core and 64-core models will be at higher prices than many groups consider cost-effective. 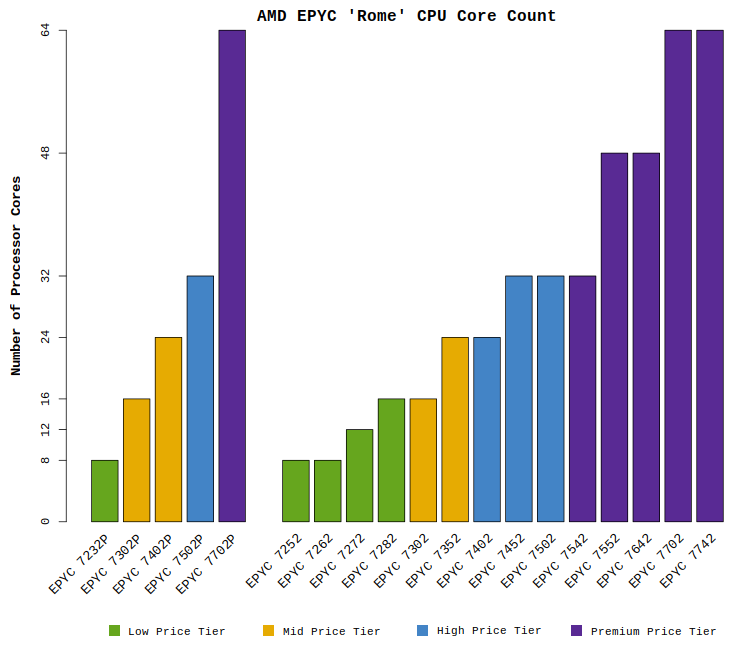 The CPU frequencies of the new AMD EPYC CPUs are relatively high – a welcome improvement over the previous generation. Each core supports “Boost” speeds enabling temporary boosts of speed over the base clock speed. The maximum Boost speed for each CPU model is shown as a dotted line. 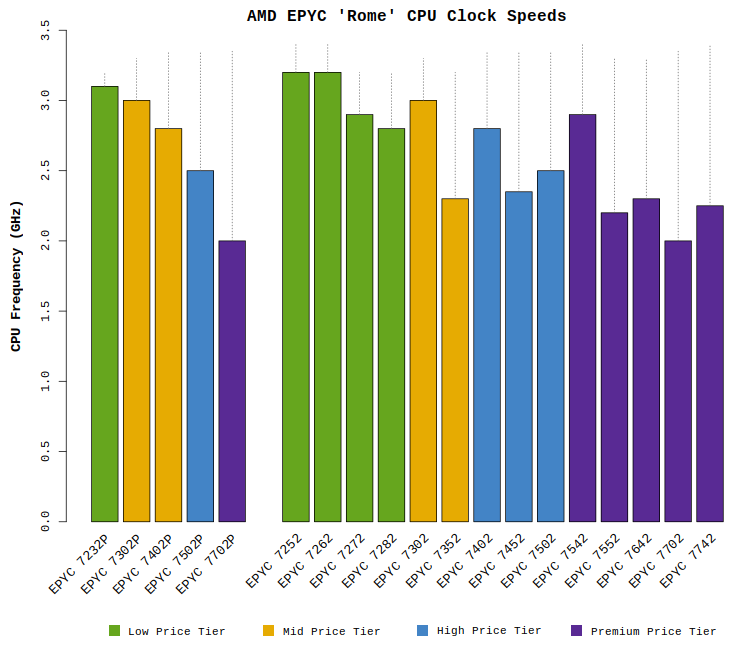 Supported memory speeds of the AMD EPYC “Rome” processors are straightforward. The amount of memory bandwidth available per CPU core can be an important consideration, but is simply a function of the number of cores. Teams planning to select CPUs with higher core counts need to ensure that each core won’t be starved of data. 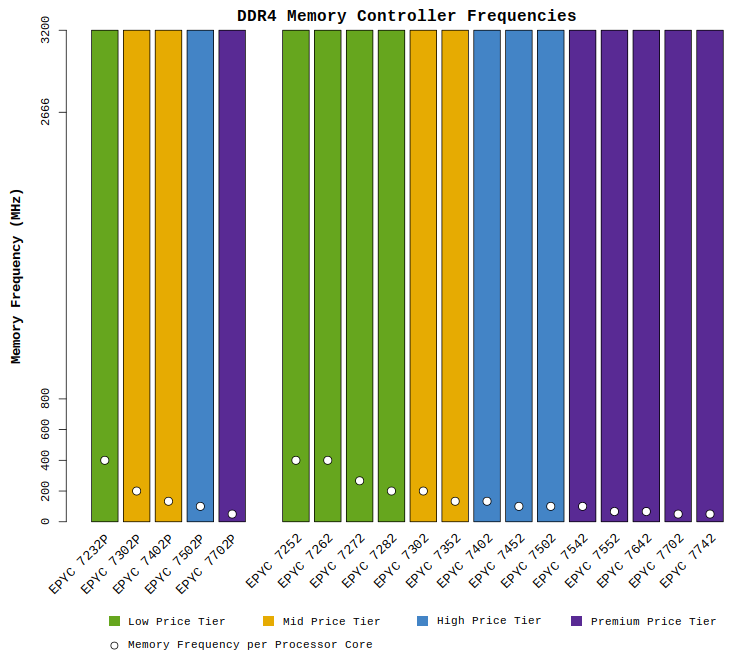 With EPYC Rome, AMD has brought a tremendous increase in the size of L3 cache. This is expected to offer significant benefits for demanding applications. 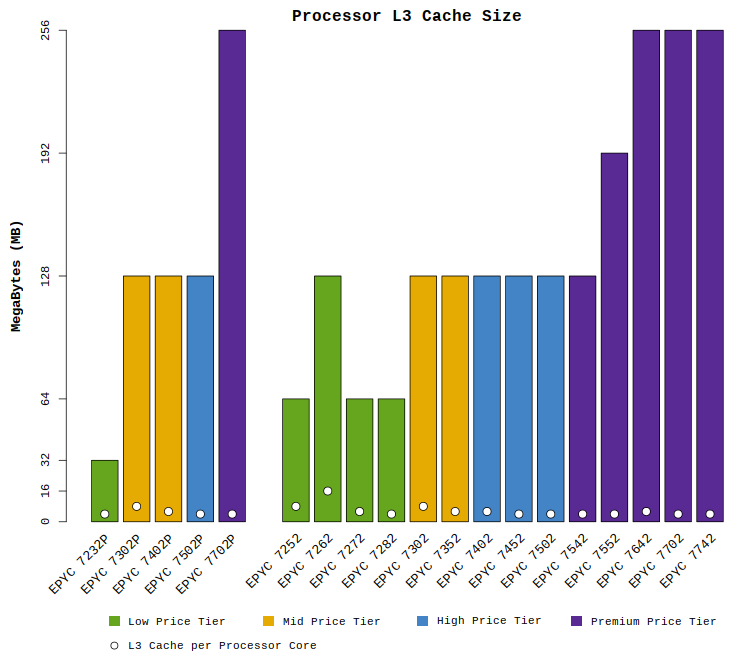 Although dual-socket systems continue to be the most common for HPC & AI workloads, the capabilities of a single EPYC CPU can be compelling. A variety of single-socket EPYC systems are available, and AMD has built several CPU SKUs which support only single-socket operation. The plot below compares the various CPU socket counts supported by this processor line-up. 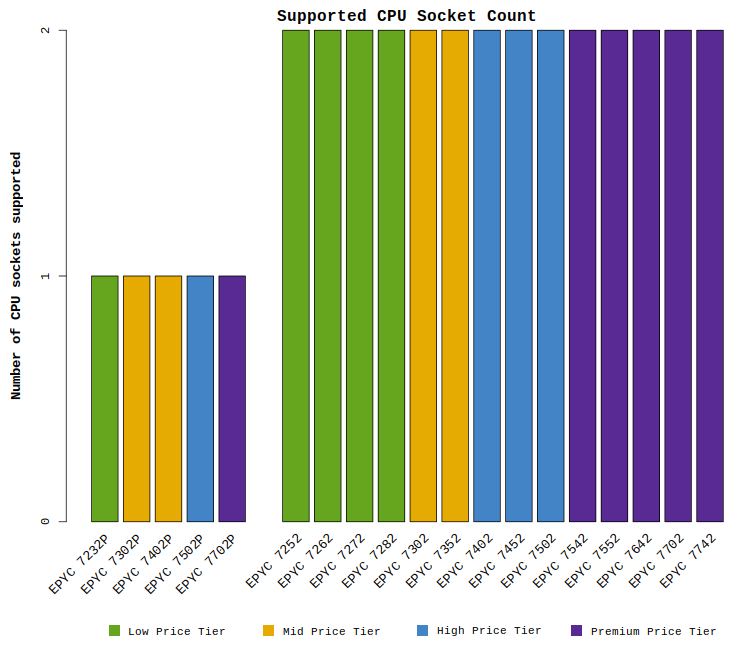 As the industry pushes for increased performance, CPU power requirements have increased across the board. The lowest-wattage EPYC “Rome” CPU is 120 Watts, with the majority of models in the 155W~180W range. The highest core count models are over 200 Watts. HPC users must be certain that the systems they select have received thorough thermal validation. Systems which run hot will throttle CPU speeds and suffer lower performance. 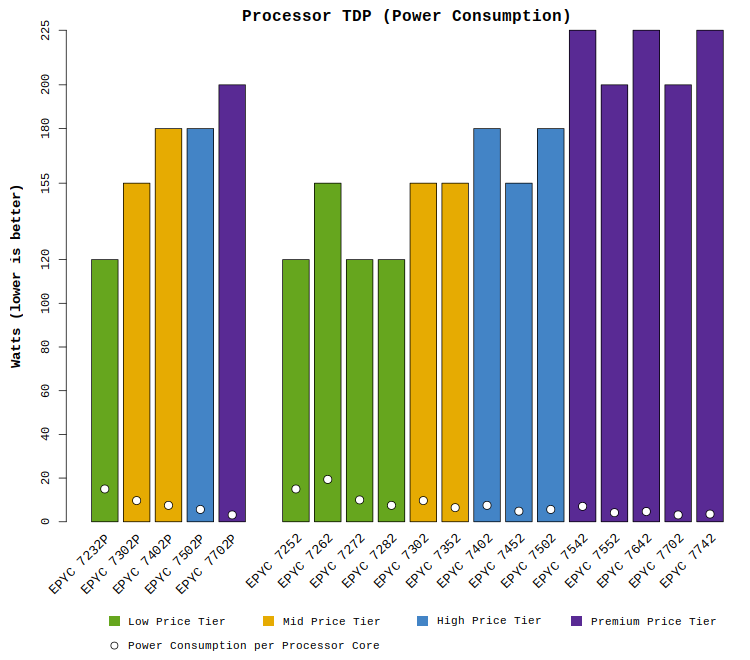 Overall, the AMD EPYC processors provide great value in price spent versus performance achieved. However, there is a spectrum of efficiency, with certain CPU models offering particularly compelling value. Also remember that the prices and power requirements for some of the top models are fairly high. Savvy readers may find the following facts useful:

The plots below compare the cost-effectiveness and power efficiency of these CPU models. The intent is to go beyond the raw “speeds and feeds” of the processors to determine which models will be most attractive for HPC and Deep Learning/AI deployments.

Historically, we have looked at the performance of each CPU and compared that with their costs. However, this presents a distorted view as it does not include all the other necessary components in an HPC/AI system (the server, system memory, high-speed fabric, etc). That simplistic comparison is shown further below, but first examine this plot which demonstrates the cost per FLOPS for a set of complete Compute Nodes with AMD EPYC Rome CPUs, 4GB of system memory per core, and 100Gbps EDR InfiniBand. As shown, the models with higher core counts tend to be the most cost-effective overall. 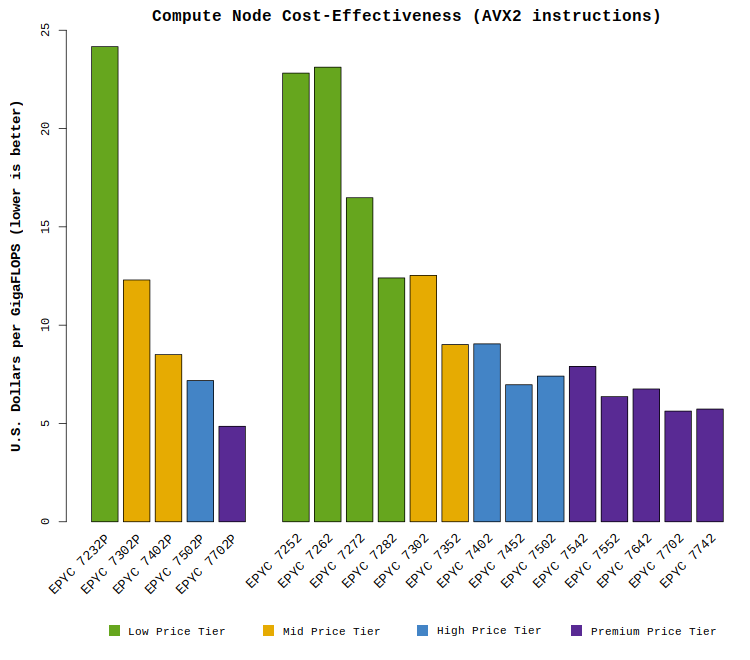 The plot below shows a simple comparison of CPU performance versus the number of FLOPS provided for each model. This may be useful when comparing to older CPU models, but for new projects we recommend the plot above. 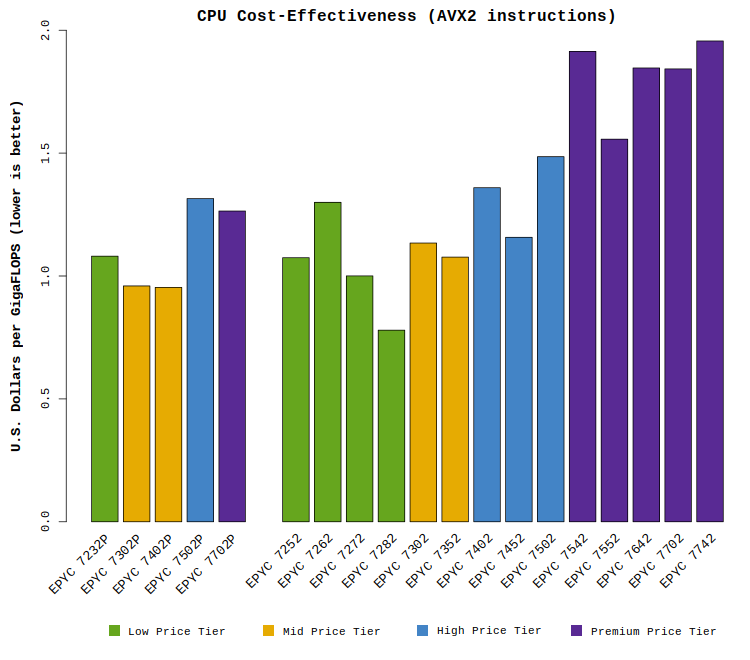 This plot compares the power requirements (TDP) versus performance throughput of each CPU. Although this generation includes some of the highest-wattage CPUs to date, each is actually quite power efficient. In fact, even the 225-Watt CPU models are among the top most-efficient models in this product line. 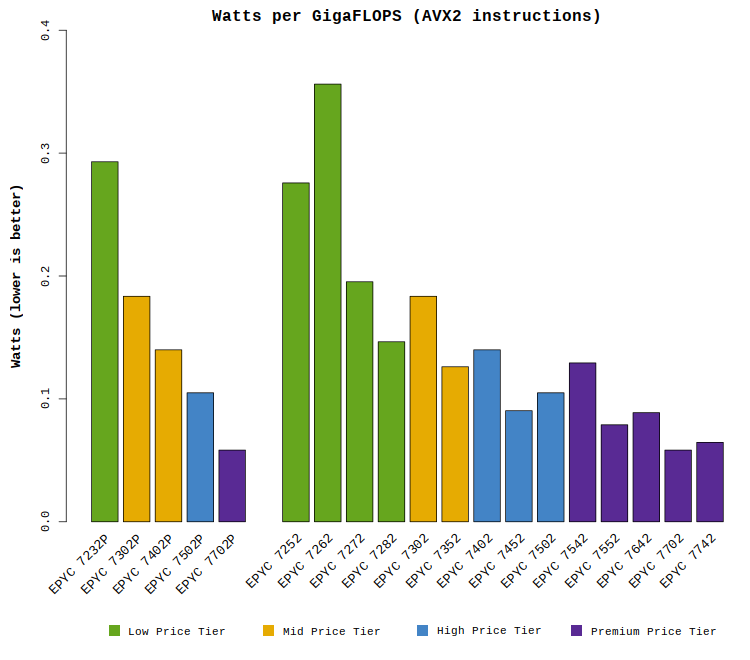 Although most of the EPYC CPUs will offer excellent performance, it is common for computationally-demanding sites to set a floor on CPU clock speeds (usually around 2.5GHz). The intent is to ensure that no workload suffers too low of a performance, as not all are well parallelized. While there are users who would prefer higher clock speeds, experience shows that most groups settle on a minimum clock speed around ~2.5GHz. With that in mind, the comparisons below highlight only those CPU models which offer 2.5+GHz performance. 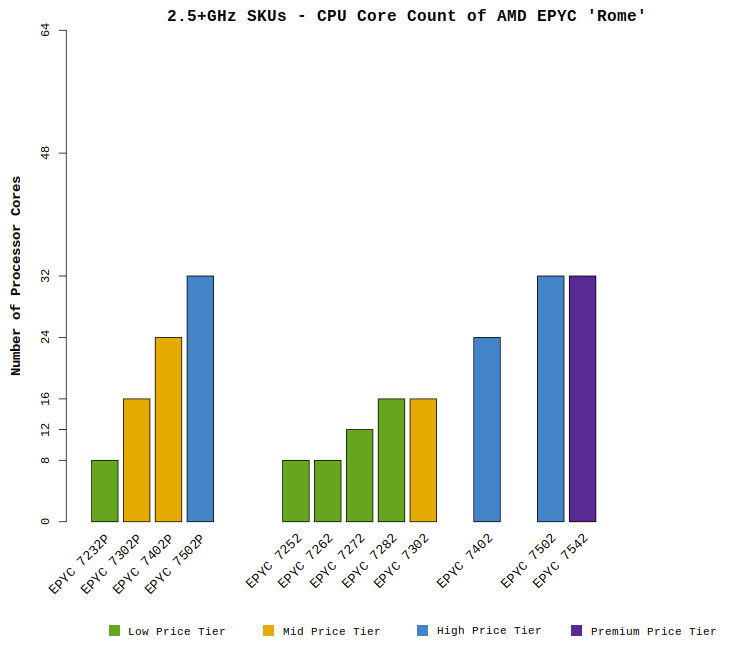 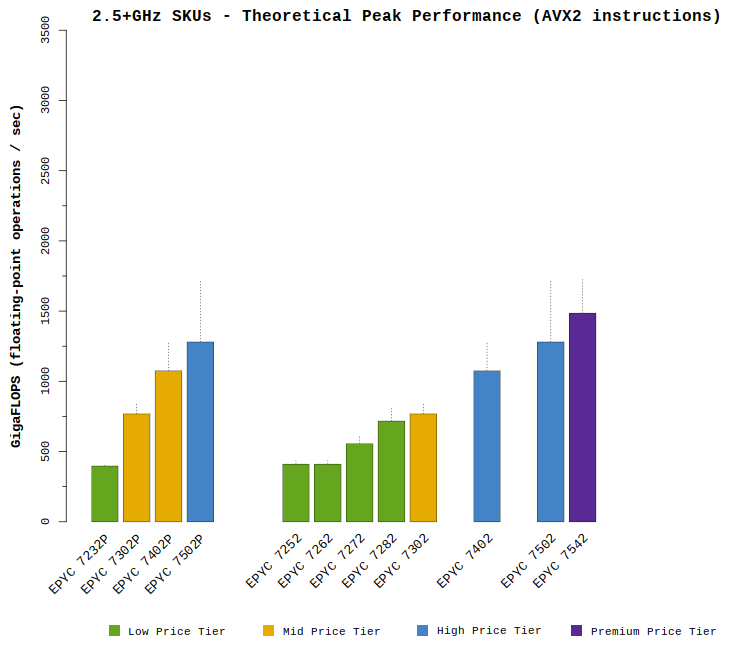 As discussed above, this plot shows the price per FLOPS for Complete Compute nodes with 4GB of system memory per CPU core (which is towards the lower end of what many HPC sites currently deploy). 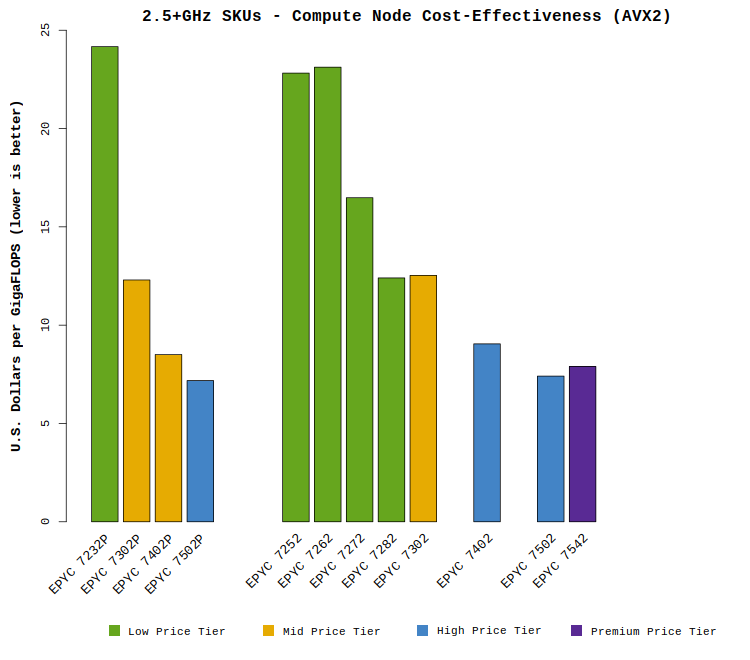