I’ve had several customers comment to me that it’s difficult to find someone that can speak with them intelligently about PCI-E root complex questions. And yet, it’s of vital importance when considering multi-CPU systems that have various PCI-Express devices (most often GPUs or coprocessors).

First, please feel free to contact one of Microway’s experts. We’d be happy to work with you on your project to ensure your design will function correctly (both in theory and in practice). We also diagram most GPU platforms we sell, as well as explain their advantages, in our Microway's NVIDIA Tesla V100 GPU Solutions Guide

It is tempting to just look at the number of PCI-Express slots in the systems you’re evaluating and assume they’re all the same. Unfortunately, it’s not so simple, because each CPU only has a certain amount of bandwidth available. Additionally, certain high-performance features – such as NVIDIA’s GPU Direct technology – require that all components be attached to the same PCI-Express root complex. Servers and workstations with multiple processors have multiple PCI-Express root complexes. We dive deeply into these issues in our post about Common PCI-Express Myths. 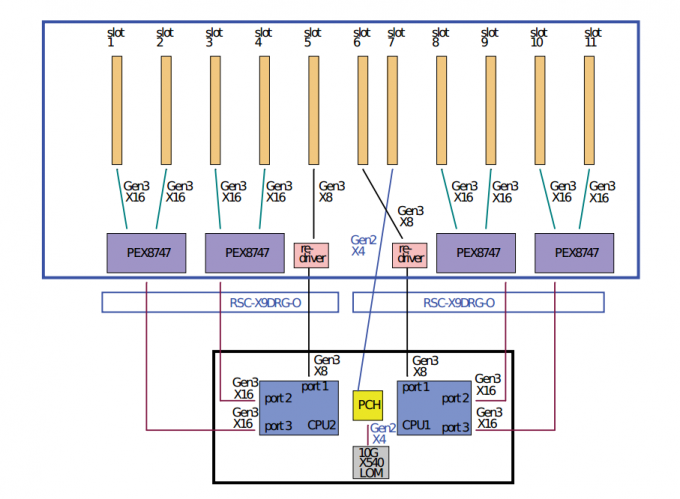 It’s a bit difficult to parse, but the important points are:

In total, you end up with eight x16 slots and two x8 slots evenly divided between two PCI-Express root complexes. The final x4 slot can be used for low-end devices.

While the layout above may not be ideal for all projects, it performs well for many applications. We have a variety of other options available (including large amounts of devices on a single PCI-E root complex). We’d be happy to discuss further with you.

My interests span from astrophysics to bacteriophages; high-performance computers to small spherical magnets. I've been an avid Linux geek (with a focus on HPC) for more than a decade. I work as Microway's Vice President of Strategic Accounts and HPC Initiatives.
View all posts by Eliot Eshelman →
This entry was posted in Hardware, Pitfalls and tagged coprocessor, gpu, High Performance Computing. Bookmark the permalink.