In this Caffe deep learning tutorial, we will show how to use DIGITS in order to train a classifier on a small image set.  Along the way, we’ll see how to adjust certain run-time parameters, such as the learning rate, number of training epochs, and others, in order to tweak and optimize the network’s performance.  Other DIGITS features will be introduced, such as starting a training run using the network weights derived from a previous training run, and using a completed classifier from the command line.

The Caffe Deep Learning framework has gained great popularity. It originated in the Berkeley Vision and Learning Center (BVLC) and has since attracted a number of community contributors.

NVIDIA maintains their own branch of Caffe – the latest version (0.13 at the time of writing) can be downloaded from NVIDIA’s github.

The latest version of NVIDIA DIGITS (2.1 at the time of writing) can be downloaded here. 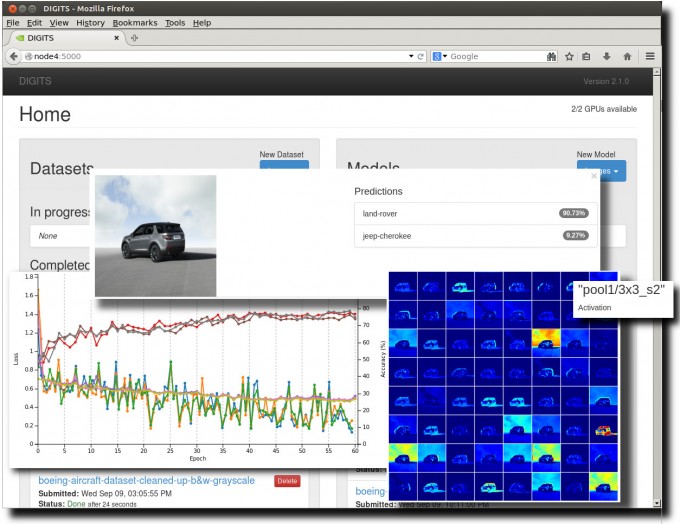 Since the data associated with a trained neural network classifier is not heavy in data weight, a classifier could be easily deployed onto a mobile embedded system, and run, for example, by an NVIDIA Tegra processor. In many cases, however, neural network image classifiers are run on GPU-accelerated servers at a fixed location.

Runtimes will be compared for various configurations of these Tesla GPUs (see gpu benchmarks below). The main objectives of this tutorial, however, can be achieved using other NVIDIA GPU accelerators, such as the NVIDIA GeForce GTX Titan X, or the NVIDIA Quadro line (K6000, for example).  Both of these GPUs are available in Microway’s Deep Learning WhisperStation™, a quiet, desktop-sized GPU supercomputer pre-configured for extensive Deep Learning computation.  The NVIDIA GPU hardware on Microway’s HPC cluster is available for “Test Driving”. Readers are encouraged to request a GPU Test Drive.

Introduction to Deep Learning with DIGITS

The process of building a deep learning artificial neural network image classifier for these two types of SUVs using NVIDIA DIGITS is described in detail below in a video tutorial.  As a simple proof of concept, only these two SUV types were included in the data set.  A larger data set could be easily constructed including an arbitrary number of vehicle types.  Building a high quality data set is somewhat of an art, where consideration must be given to:

The laborious task of planning and creating a quality image data set is an investment into the final performance quality of the deep learning network, so care and attention at this stage will yield better performance during classifier testing and deployment.  The original SUV image data set was expanded by window sub-sampling the original set of images, and then by also applying horizontal, vertical, and combined flips of the sub-sampled, as well as of the original images.

Beforehand, some performance-oriented questions we can pose are:

A GoogLeNet neural network model computation was benchmarked on the same learning parameters and dataset for the hardware configurations shown in the table below. All other aspects of hardware were the same across these configurations.

1compared against the runtime on a single Tesla K40 GPU

The runtimes in this table reflect 30 epochs of training the GoogLeNet model with a learning rate of 0.005. The batch size was set to 120, compared to the default of 24. This was done in order to use a greater percentage of GPU memory.

In this tutorial, we specified a local directory for DIGITS to construct the image set. If you instead provide text files for the training and validation images, you may want to ensure that the default setting of Shuffle lines is set to “Yes”. This is important if you downloaded your images sequentially, by category. If the lines from such files are not shuffled, then your validation set may not guide the training as well as it would if the image URLs are random in order.

Although NVIDIA DIGITS already supports Caffe deep learning, it will soon support the Torch and Theano frameworks, so check back with Microway’s blog for more information on exciting new developments and tips on how you can quickly get started on using Deep Learning in your research.

My background in HPC includes building two clusters at the University of Massachusetts, along with doing computational research in quantum chemistry on the facilities of the Massachusetts Green High Performance Computing Center. My personal interests and academic background encompass a range of topics across science and engineering. In recent work, I used the GAMESS quantum chemistry package in order to study theoretical highly strained hydrocarbon structures, derived from prismane building blocks. I also recently authored a small software application in Python for generating amorphous cellulose within a periodic space. This application was used for generating structures for further study in NAMD and LAMMPS. Prior to doing research in Quantum and Materials Chemistry, I worked on problems related to protein folding and docking. It is very exciting, especially, to be involved with applications of GPU computing to these, as well as to other scientific questions. For several years, while not doing research, I was a consulting software engineer and built a variety of internet and desktop software applications. As an HPC Sales Specialist at Microway, I greatly look forward to advising Microway's clients in order to provide them with well-configured, optimal HPC solutions.
View all posts by John Murphy →
This entry was posted in Benchmarking, Software, Test Drive and tagged benchmark, deep learning, gpu, K80, NVIDIA DIGITS, tesla. Bookmark the permalink.