Many within the HPC community have been eagerly awaiting the new Intel Xeon E5-4600 v2 CPUs. To those already familiar with the “Ivy Bridge” architecture in the Xeon E5-2600 v2 processors, many of the updated features of these 4-socket Xeon E5-4600 v2 “Ivy-Bridge” CPUs should seem very familiar. Read on to learn the details.

More for Your Dollar – Performance Uplift

With an increase in core count, clock speed and memory speed, HPC applications will achieve better performance on these new Xeons. Depending on the choice of SKU, users should expect to see 10% to 30% performance improvement for floating-point applications (model-to-model) without spending more. Even greater speedups are possible by upgrading to the new 12-core Xeon E5-4657L v2:

More for Less – Switch SKUs without a Performance Penalty

Rather than spending the same amount for more performance, some users may prefer to spend less to achieve the same performance they’re seeing today. Given the microarchitecture improvements in “Ivy Bridge,” you’re still likely to come out at least a few percent ahead at the same core count and clock speed.

If your systems are a few years old, you may be able to replace several with a single new server. The AVX instruction set, introduced with the previous generation of Xeons, provides a solid 2X performance improvement by increasing the width of the math units from 128-bits to 256-bits. Combined with other improvements in Xeon E5-4600 v2, you will be able to achieve the performance of older systems using just a single core from the “Ivy Bridge” architecture.

Rather than increasing clock speeds for all “Ivy Bridge” SKUs, Intel has decided to offer some of the E5-4600 v2 processors with more cores but at a slightly slower clock speed. Specifically, the eight-core, 2.3GHz E5-4610 v2 (vs the six-core, 2.4GHz E5-4610) and the ten-core, 2.2GHz E5-4640 v2 (vs the eight-core, 2.4GHz E5-4650). Increased core counts, improved memory speeds, and Turbo Boost capabilities nearly always result in superior server performance.

Comparisons of note include:

Despite some of the caveats mentioned above, the performance results achieved so far have been quite impressive. Benchmark numbers for the industry-standard floating-point SPEC fp_rate2006 suggest that even the modest Xeon E5-4610 v2 CPUs will stand up against the best of the dual-socket “Ivy Bridge” Xeon CPUs and the best of the previous-generation “Sandy Bridge” quad-socket CPUs. 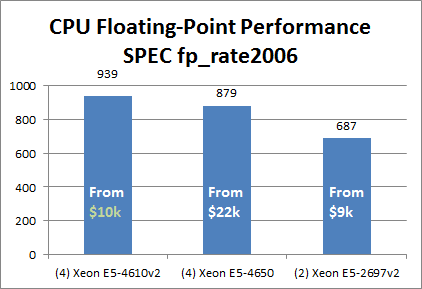 Similar to what Intel did with the Xeon E5-2600 v2 series, memory performance is boosted across the board with Xeon E5-4600 v2 (Ivy Bridge):

This 16-20% memory performance uplift for Xeon E5-4600 v2 is a critical performance boost for memory-intensive applications.

Many CFD, FEA, and Multiphysics applications prioritize clock speed (least threaded areas), core count (well threaded solvers), and most of all memory bandwidth at once. The Xeon E5-4627 v2 SKU pairs the memory performance and core count of a 4-socket system with a high base clock speed. Previously, customers had to sacrifice one or the other.

Microway thinks this will be a winning combination for users whose models exceed the memory capacity of a 2-socket system. We anticipate extended discussion of this SKU with users of these applications.

As always, please contact an HPC expert if you would like to discuss in further detail. Intel has produced an Intel Xeon E5-4600 v2 Product Brief that’s available on our Knowledge Base. You may also wish to review our products which leverage these new Xeon processors:

This entry was posted in Hardware and tagged cpu, High Performance Computing. Bookmark the permalink.