The framework uses Google TensorFlow, along with scikit-learn, for expressing neural networks for deep learning. It also makes use of the RDKit python framework, for performing more basic operations on molecular data, such as converting SMILES strings into molecular graphs. The framework is now in the alpha stage, at version 0.1. As the framework develops, it will move toward implementing more models in TensorFlow, which use GPUs for training and inference. This new open source framework is poised to become an accelerating factor for innovation in drug discovery across industry and academia.

Another unique aspect of DeepChem is that it has incorporated a large amount of publicly-available chemical assay datasets, which are described in Table 1.

Table 1: The current v0.1 DeepChem Framework includes the data sets in this table, along others which will be added to future versions.

The squared Pearson Correleation Coefficient is used to quantify the quality of performance of a model trained on any of these regression datasets. Models trained on classification datasets have their predictive quality measured by the area under curve (AUC) for receiver operator characteristic (ROC) curves (AUC-ROC). Some datasets have more than one task, in which case the mean over all tasks is reported by the framework.

DeepChem uses a number of methods for randomizing or reordering datasets so that models can be trained on sets which are more thoroughly randomized, in both the training and validation sets, for example. These methods are summarized in Table 2.

Table 2: Various methods are available for splitting the dataset in order to avoid sampling bias.

DeepChem offers a number of featurization methods, summarized in Table 3. SMILES strings are unique representations of molecules, and can themselves can be used as a molecular feature. The use of SMILES strings has been explored in recent work. SMILES featurization will likely become a part of future versions of DeepChem.

Most machine learning methods, however, require more feature information than can be extracted from a SMILES string alone.

Table 3: Various methods are available for splitting the dataset in order to avoid sampling bias.

Supported Models as of v0.1

A Glimpse into the Tox21 Dataset and Deep Learning

The Toxicology in the 21st Century (Tox21) research initiative led to the creation of a public dataset which includes measurements of activation of stress response and nuclear receptor response pathways by 8,014 distinct molecules. Twelve response pathways were observed in total, with each having some association with toxicity. Table 5 summarizes the pathways investigated in the study.

We used the Tox21 dataset to make predictions on molecular toxicity in DeepChem using the variations shown in Table 6.

A .csv file containing SMILES strings for 8,014 molecules was used to first featurize each molecule by using either ECFP or molecular graph convolution. IUPAC names for each molecule were queried from NIH Cactus, and toxicity predictions were made, using a trained model, on a set of nine molecules randomly selected from the total tox21 data set. Nine results showing molecular structure (rendered by RDKit), IUPAC names, and predicted toxicity scores, across all 12 biochemical response pathways, described in Table 5, are shown in Figure 1. 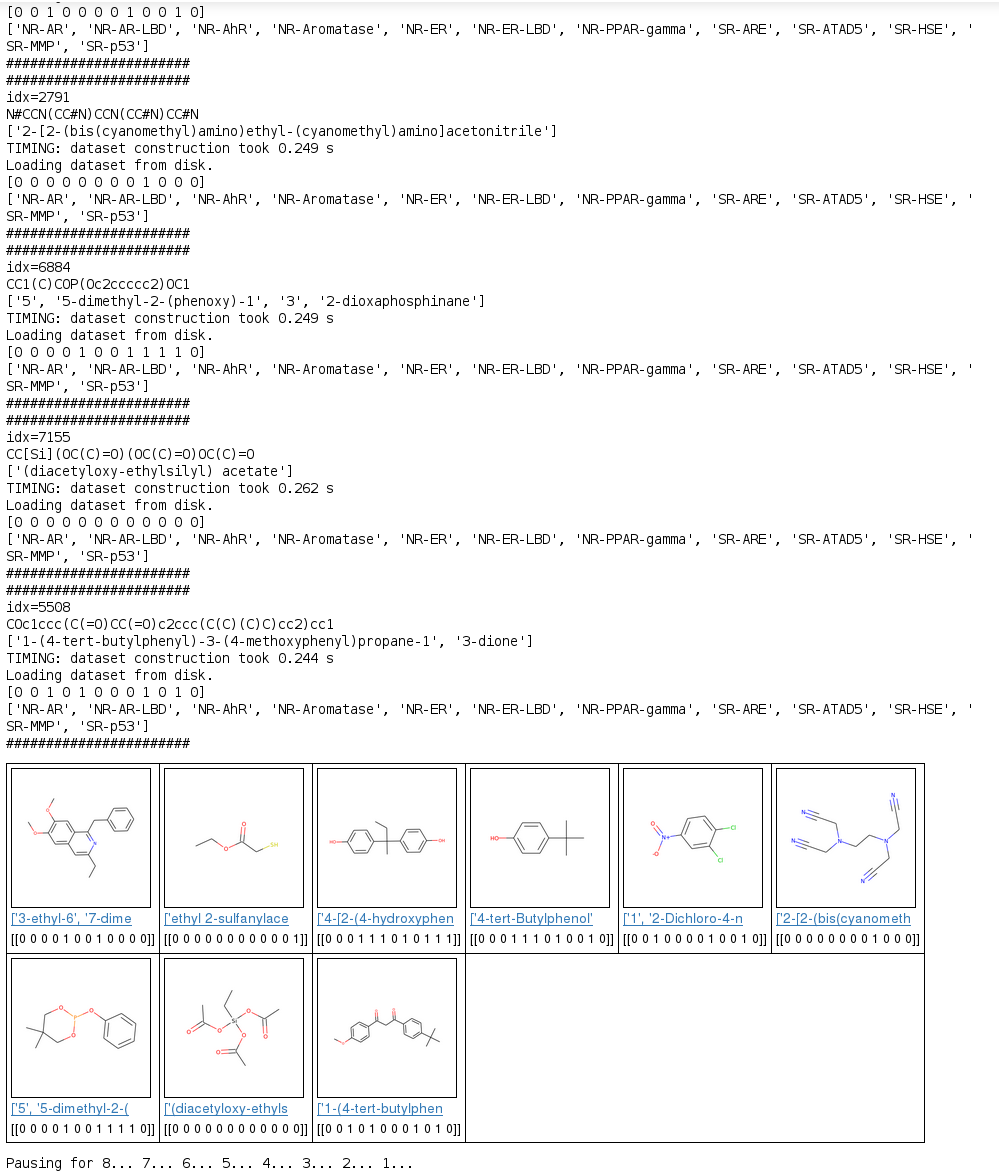 Expect more from DeepChem in the Future

The DeepChem framework is undergoing rapid development, and is currently at the 0.1 release version. New models and features will be added, along with more data sets in future. You can download the DeepChem framework from github. There is also a website for framework documentation at deepchem.io.

My background in HPC includes building two clusters at the University of Massachusetts, along with doing computational research in quantum chemistry on the facilities of the Massachusetts Green High Performance Computing Center. My personal interests and academic background encompass a range of topics across science and engineering. In recent work, I used the GAMESS quantum chemistry package in order to study theoretical highly strained hydrocarbon structures, derived from prismane building blocks. I also recently authored a small software application in Python for generating amorphous cellulose within a periodic space. This application was used for generating structures for further study in NAMD and LAMMPS. Prior to doing research in Quantum and Materials Chemistry, I worked on problems related to protein folding and docking. It is very exciting, especially, to be involved with applications of GPU computing to these, as well as to other scientific questions. For several years, while not doing research, I was a consulting software engineer and built a variety of internet and desktop software applications. As an HPC Sales Specialist at Microway, I greatly look forward to advising Microway's clients in order to provide them with well-configured, optimal HPC solutions.
View all posts by John Murphy →
This entry was posted in Development, Software and tagged deep learning, gpu, GROMACS, hoomd-blue, NAMD, tesla. Bookmark the permalink.