In my previous post, I presented a brief introduction to the CUB library of CUDA primitives written by Duane Merrill of NVIDIA. CUB provides a set of highly-configurable software components, which include warp- and block-level kernel components as well as device-wide primitives. This time around, we will actually look at performance figures for codes that utilize CUB primitives. We will also briefly compare the CUB-based codes to programs that use the analogous Thrust routines, both from a performance and programmability perspective. These comparisons utilize the CUB v1.3.1 and Thrust v1.7.0 releases and CUDA 6.0.

Before we proceed, I need to issue one disclaimer: the examples below were written after a limited amount of experimentation with the CUB library, and they do not necessarily represent the most optimized implementations. However, these examples do illustrate the flexibility of the API and they give an idea of the kind of performance that can be achieved using CUB with only modest programming effort.

A kernel implementation that uses CUB’s block-level primitives is shown below:

In this example, each thread block processes a tile of BLOCK_THREADS*ITEMS_PER_THREAD input elements, and for simplicity the size of the input array is assumed to be a multiple of the tile size. As its name suggests, the function LoadDirectBlockedVectorized uses vectorized loads to increase memory bandwidth utilization. (We could also have used the higher-level BlockLoad class to perform the global-memory loads. The BlockLoad class is templated on the load algorithm, making it trivial to switch between vectorized loads and other approaches.) Global memory loads are coalesced provided that ITEMS_PER_THREAD does not exceed the maximum allowed vector-load width (for example, four ints or floats). unaryOp is a unary C++ function object. In order to compute the sum of the squares of the elements of the input array, we choose unaryOp to be an instance of the Square<T> class, which is defined as follows:

In this declaration, InputIterator is another iterator type, which could simply be a pointer to a native device type; ConversionOp is a unitary operator class, such as the Square class defined above; and ValueType is the input value type. The precise meaning of these template arguments should become clear in the discussion below. Utilizing iterators, we can compute the Euclidean norm squared using the following reduction-kernel template:

CUB contains a range of device-level primitives, including a device-wide reduction optimized for different architectures. Therefore, the only reason for implementing custom kernels for this particular calculation is that they might provide some performance advantage. The calculation can be implemented with CUB’s device-level API by using the input iterator defined above and calling

The squared norm is then returned in the variable output. The same calculation can be performed using the Thrust library by calling

in the client application.

Fig. 1 shows performance data for codes that use the reduction kernels defined above, together with performance results for code using the DeviceReduce::Sum primitive. The corresponding performance figures for thrust::transform_reduce are also shown. These results were obtained on tests involving 32-bit floating-point data running on a Tesla K40c. Limited experimentation indicated that setting the thread-block size (BLOCK_THREADS) to 128 gave the best performance for both SumKernel and TransformSumKernel, and the block-wide reduction algorithm was set to BLOCK_REDUCE_RAKING_COMMUTATIVE_ONLY in both cases. The number of data items processed per thread (ITEMS_PER_THREAD) was set to 4 in runs involving TransformSumKernel, which uses vectorized loads. Choosing ITEMS_PER_THREAD=8, gave better performance in SumKernel. On all problem sizes, the CUB-based codes significantly outperform the code that utilizes the transform_reduce Thrust routine. We also see that the code that utilizes the DeviceReduce::Sum primitive is always competitive with code that utilizes our hand-tuned kernels, and, in fact, gives the best performance on all but the largest input arrays. This result is very encouraging since the use of CUB’s device-wide primitives in a client application requires very little programming effort, comparable to the effort required to utilize the corresponding Thrust primitives. 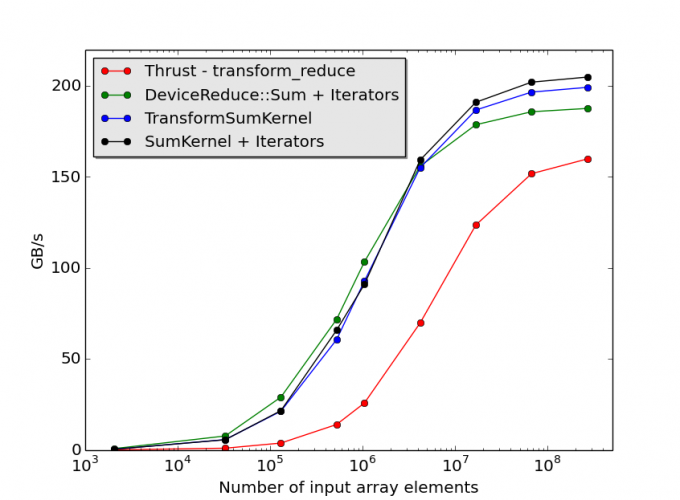 Fig. 1 – Performance measurements for the calculation of the square of the Euclidean norm of a float32 vector on a Tesla K40c

Let’s consider the slightly more contrived example of the calculation of the inclusive prefix sum of the squares of the elements of an integer array. Given the input and output arrays int a_in[N] and int a_out[N], this calculation corresponds to the following serial C++ code:

In analogy to the reduction example above, the calculation can also be implemented using CUB’s DeviceScan::InclusiveSum function together with the TransformInputIterator class. We tested the CUB-based approach and an implementation using Thrust on 32-bit integer data on a Tesla K40c. However, in our initial tests the CUB-based implementation showed lower-than-expected performance on large input arrays. These performance figures correspond to the green points in Fig. 2 below, where the input iterator passed to DeviceScan::InclusiveSum was of type TransformInputIterator<int, Square<int>, int*>. In fact, on the largest input arrays, better performance was obtained from the Thrust-based code (red points). Furthermore, we found that the code obtained by omitting the square operation and simply passing a pointer to the data in global memory (in this case, an int* pointer) to DeviceScan::InclusiveSum achieved approximately twice the performance on large problem sizes. 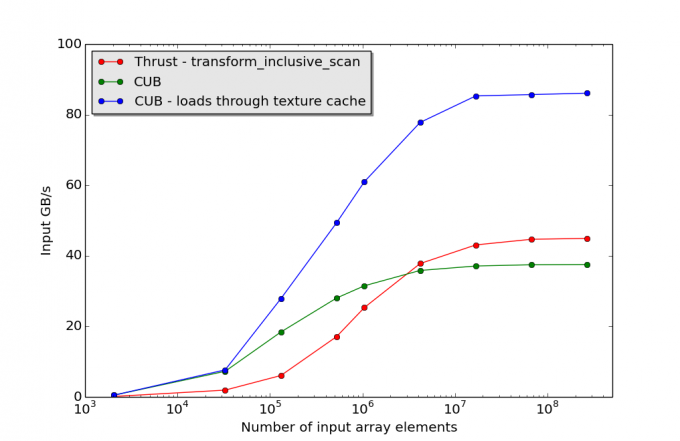 Fig. 2 – Performance of code to compute the inclusive prefix sum of the squared elements of an int32 array measured on a Tesla K40c

A quick look at the CUB source code revealed the reason for the disparity in performance. It turns out that on compute-capability 3.5 devices, DeviceScan::InclusiveSum is configured to load data through texture cache automatically – provided the input iterator is a pointer to a native device type. However, for more general iterator types, the use of texture cache has to be specified explicitly in the client application. Fortunately, this is easy to implement using the CacheModifiedInputIterator class defined in CUB. To utilize texture cache, input_iter, the iterator passed to the prefix-sum routine, should be defined as follows in the client code:

The LOAD_LDG template argument specifies the use of texture cache on sm_35 hardware. The blue points in Fig. 2 correspond to performance figures obtained using the LOAD_LDG option, which, on large data sets, gives a 2x speedup over the code that does not utilize texture cache. CUB’s iterators support a number of other access modes, and although a comprehensive discussion of iterators is beyond the scope of this post, we encourage the reader to explore the iterator classes.

In this post, we have looked at variants of the reduction and prefix-sum algorithms that involve a transformation of the input data and how they might be implemented using the CUB library. In particular, we’ve considered implementations involving CUB’s device-level functions and iterator classes. These implementations compare favorably with code based on custom kernels and offer superior performance to the corresponding Thrust-based implementations. The examples also illustrate the flexibility and composability provided by CUB’s iterator classes.

About Justin Foley (for Microway)

I'm a developer with a background in particle physics. My background is in Lattice Quantum ChromoDynamics (LQCD), which is a numerical treatment of the Strong nuclear interaction and a significant HPC application. I currently spend most of my time contributing to QUDA, a library for performing LQCD calculations on NVIDIA GPUs.
View all posts by Justin Foley (for Microway) →
This entry was posted in Development, Software and tagged CUDA, gpu. Bookmark the permalink.