Microway April 2010 News Brief
Supercomputing News You Can Use

AMD, Intel and NVIDIA have each made major product releases over the past 4 weeks. All are described below and are immediately available in Microway's fully-integrated clusters, servers and WhisperStations. Whether you need a budgetary quote, immediate delivery or technical advice, we are here for you.
We have published a new in-depth technical analysis of GPU architectures and performance - click here.
Microway will be running life-science applications on NVIDIA Tesla "Fermi" GPUs at BioIT World Expo.
Visit us in Booth 116 on April 20-22 in Boston.
AMD Opteron 6100-series Processors (formerly "Magny Cours") 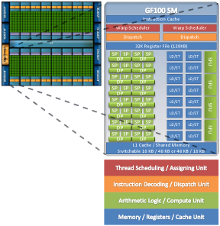 GPGPU Architecture Analysis
NVIDIA's long-awaited Tesla GPU based on the Fermi architecture will be released this month. Customers with pre-orders in place will be receiving their cards in the coming weeks. Those considering a Tesla purchase are urged to place their order soon, as the new cards will be delivered on a first-come, first-served basis starting 4/28/2010. C2070, S2050 and S2070 products will be available in Q3 2010.
Learn more about running life science applications on Tesla GPUs:
NVIDIA Bio Workbench
Learn more about Microway's Tesla GPU-based workstations and clusters.
Accelerate your research!
Take advantage of our expertise: we can recommend the most effective compute solutions, help you plan a painless installation, and deliver fully-tested/fully-integrated clusters, servers and workstations.