Articles > Power and Cooling (Multiple-Computer Installations)
This article applies to groups of computers which consume 1,000+ Watts of electricity. Review your quote or contact us to determine how much your systems will require (the power and cooling numbers are typically listed at the end of the quote – below the total cost of the system).

Microway’s server systems provide intelligent cooling fans which ramp up and down with system load. However, most systems are very high-density with more than 1,000 Watts consumed per rack unit. Cooling such systems requires high-speed fans which generate significant noise. Most cluster systems will generate 60 dB to 80 dB. This noise level may be subject to safety regulations (e.g., OSHA) and will be audible from other offices in the building. It is recommended that your cluster be placed in a location designed for servers.

If noise is a concern, many of Microway’s workstations – most notably the WhisperStation – are designed to be very quiet and comfortable for an office environment. Quiet HPC Clusters built from Microway WhisperStations are available. If you have any concerns, discuss these matters with your salesperson. In general, if it’s not a WhisperStation you should consider whether the system is appropriate for a lab or office environment.

Microway servers feature auto-switching power supplies which accept both 120V and 208V power, so there are a variety of options when powering multiple computers. The most common electrical circuits are pictured below. Your salesperson can provide a customized recommendation including the rackmount cabinet, power distribution units and optional UPS backup power.

In general, 208V is recommended over 120V. Using 208V allows more systems to run on a single circuit, and each system runs several percent more efficiently. 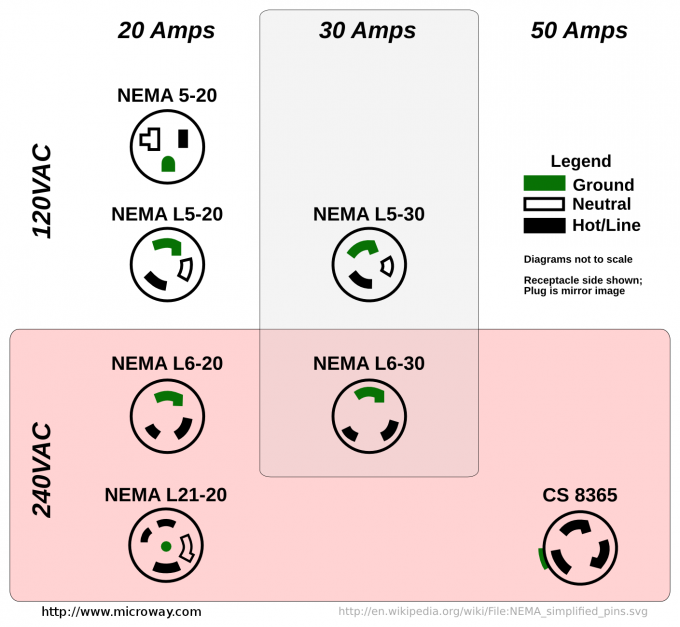 After safety de-rating, these circuits supply up to 5,700 Watts of power.

Before assuming a particular circuit layout will be sufficient for your new equipment, review:

Groups of computers typically require special cooling arrangements – your building air-conditioning is designed for offices and will not be able to keep up with the load of compute servers. Note that some facilities reduce or shut down air-conditioning during holidays and weekends. Systems will overheat if they are run in a closed room without sufficient cooling.

A server room or datacenter is the best location for your systems. Microway servers and clusters are designed for installation in industry-standard rackmount cabinets, so you should have no concern when using your own cabinets. We can also provide cabinets with network and power cables pre-wired.

Many facilities specify a maximum power load per rackmount cabinet. You may be restricted to only 7kW or 10kW per cabinet, which would result in racks which are only half-filled. To be certain, present the cooling requirements (provided by your salesperson) to your facilities manager. Your facilities personnel will have details on the cooling load limitations of the datacenter/server room.